It’s impossible that the head of world football can say so many stupid things about the state of football and what we can do to improve different aspects of the beautiful game.

There are some weird and wonderful rules implemented to football in the 9 years that Joseph Blatter has been FIFA President. For example as of 2004 players get booked for removing their shirt or for what he calls ‘over-zealous celebrating’. Why? As long as the ‘offending’ player is with his own fans and not inciting trouble with the opposition (Ã  la Robbie Fowler) what’s the big deal?

Let’s face it, Blatter is a pleb, and it doesn’t surprise me about his notion that quotas on foreigners should be introduced as its killing the national game. Now I’m going to use England as an example here.

In 1992 when the Premier League began there were 11 foreigners named in the entire first round of matches, however England failed to qualify for USA 1994. Blame the foreigners for that one Sepp!

Now the answer to my question at the top is simple; NO. The main reason why England ‘underperforms’ is that we’re not producing the players! You think about it, when was the last time that a truly magical English talent came through the ranks of the academies. In recent memory I can think of only Wayne Rooney. Steven Gerrard and Michael Owen are now 27; they are no longer our young exciting players. It has always been the case though, if you’re good enough you get your game. But who is? Who is a player under 20 years old who is capable of great things for their club and England (Theo Walcott aside of course)?

Second reason, look at our current best players and you can name a foreigner who is better in every position, with the exception of Steven Gerrard of course (no bias from a Red, I assure you). Paul Robinson? Give me a Gigi Buffon, Iker Casillas, Petr Cech any day of the week (in fact I’ll even take Craig Gordon). John Terry? I’ll take Fabio Cannavaro, Nemanja Vidic or Ricardo Carvalho. On the flanks we have Wright-Phillips, France have Ribéry, Italy have Camoranesi. Up front we have Rooney, and although there are not many better than Roo, you would still take Drogba, Van Nistelrooy or Henry over him, whereas Toni has also been top drawer over the past couple of seasons. Make it no coincidence either that Italy have a player in each position. If you have good players, 99% of the time you win things. England have 2 it seems, and the rest are distinctly average. 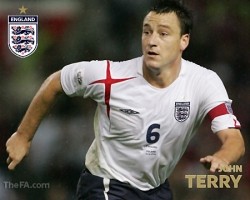 Third reason, overrated, overhyped fun-boys, predominantly of the Chelsea variety. Yes that means JT and Fun Time Frankie. John Terry is a good centre-half, he’s not the best in the world though, he’s not the best in the history of English football, so why say he is? Personally I rate a fully fit Jonathan Woodgate over JT but unfortunately we never have a fully fit Woodgate. But the notion amuses me that JT can challenge any centre-forward in the world and come out on top. He can’t. He can defend the front post well and keep the ball out of the box, but put him man-to-man he’s pretty much useless, that’s why he has Carvalho next to him for Chelsea. The main problem with England though is that in Jamie Carragher they have lost his logical partner, as Rio Ferdinand is much the same defender as John Terry is, and Carra is much the same defender that Carvalho is. Also we’re looking at Lampard. The man thinks he’s the best midfielder ever, when he’s not even a midfielder, he’s a link man. A midfielder should be able to pass, to tackle, to shoot and to control the play. Lampard fulfils 2 of these criteria. He can’t tackle or defend in any form, and don’t kid yourself otherwise. What he can do is thread the ball through the eye of a needle and rasp in a good shot (even though 90% of his goals are deflected/fumbled by keepers). You play Lampard just behind the front 2, as a separate entity to the midfield, not in tandem with the midfield. This is why England don’t win so many with him and Gerrard playing together, because Gerrard’s gut-busting bursts leave the defence exposed from the lack of midfield. We have seen the best of Lamps because of the system that Chelsea usually deploy: 2 wide men, 2 midfielders, Frank and a striker. It was when José decided to alter the make-up of this formation that Chelsea started to lose, because usually Ballack left a huge hole were he was supposed to be in the midfield. To sum Frank up, as a link man in the free-role he is the dogs bollocks, in the midfield he is just plain bollocks.

However despite this definite lack of individual quality, I think that putting together a decent team to challenge for honours is possible. The whole is much greater than the sum of its parts, as the old saying goes. I think if McLaren is radical enough to employ a 4-5-1 or 4-3-3 formation, whatever you want to call it, England have a good side. Simple Steve sort of swayed towards it when he played 3-5-2 but it didn’t work. I think that Carson should be given a chance at number 1. I also think that as long as he stays available, Sol Campbell should play alongside Terry at centre-half. With Neville still injured Micah Richards at full back, but I would expect him to move into the centre once the United skipper returns. The have Gerrard and Barry (or Hargreaves) in the centre of midfield, with Lampard ahead of them, then SWP and probably Joe Cole on the wings with Rooney up front.

On Wednesday however, I would expect England to come out in the 4-4-2. At centre half we can expect Richards and Campbell, with Wes Brown at full back. Then I would think midfield pretty much as you are; SWP, Gerrard, Barry, Cole. Up front probably Crouch and Defoe. Although above I advocated a different system, this is no time for experimenting; this is a must win/draw against Croatia with a depleted backline and strike-force. Onward to Austria/Switzerland!