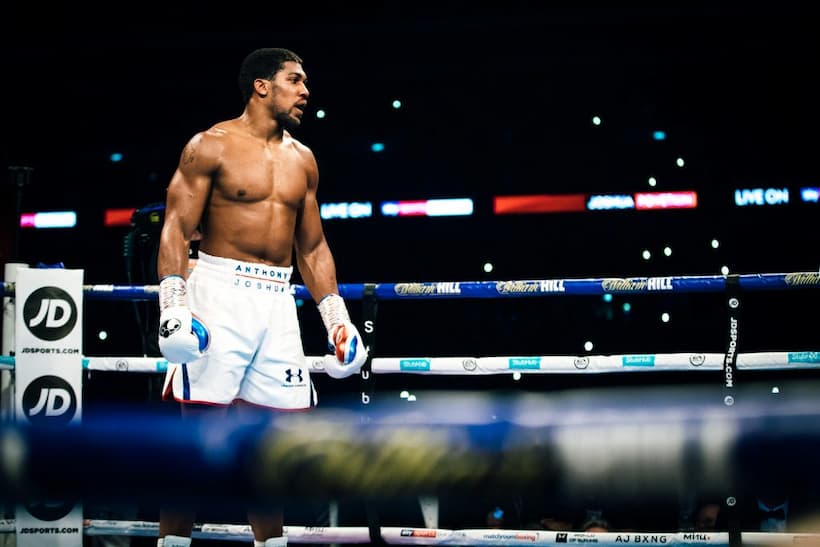 British heavyweight champion Anthony Joshua takes on Ukrainian, former-cruiserweight champion Oleksandr Usyk on Saturday, and our expert has some betting tips for the bout.

If you’re looking for AJ vs Usyk betting tips at enhanced odds, and an exclusive free bet for sportslens readers at William Hill, read on:

Anthony Joshua is 24-1 in his pro career and currently holds the WBO, IBF, and WBA heavyweight straps. The one loss on AJ’s record came against Andy Ruiz Jr in 2019, a defeat Joshua avenged six months later to reclaim his titles. Besides that one blemish, Joshua has knocked out most men to step inside the squared circle with him. The Brit has 22 KOs on his record, including the most recent conquest Kubrat Pulev, who AJ floored in the 9th round.

Anthony Joshua is a known power puncher. So why then has he cut so much muscle for the upcoming Usyk fight?

Well, the issue for AJ vs Usyk is that the Ukrainian is a far slicker boxer than both Ruiz and Pulev. While the former unified cruiserweight champion isn’t likely to pack the same power as Joshua’s aforementioned former opponents, he does throw from better angles and with more regularity. Against Tony Bellew, for example, Usyk often threw 60 punches per round and his jab/ jab-cross packs some snap, too. Joshua can’t afford to give up too much in speed vs Usyk or he’ll risk being picked off on the outside, which is why he looks leaner than ever heading into Saturday’s fight.

AJ will still boast power, and a man with 22 KOs in 24 fights always has a chance of adding to that record. But, combined with the fact that no fighter has ever beaten Usyk – let alone knocked him out – AJ dropping muscle suggests we might see much more of a technical battle than we’re used to seeing in Joshua bouts, which could mean a judges’ decision come round 12.

As stated in the previous segment, Joshua has knocked out roughly 90% of the boxers that he’s shared a ring with. So, if the lights-out power is still there, and AJ catches his 34-year-old opponent with a clean hook or an uppercut as he motions forward, the KO is always on the cards.

William Hill is offering enhanced odds of 7/2 on an AJ win by KO/TKO between rounds one to six, meaning a £10 wager could payout £45.

3. Anthony Joshua vs Oleksandr Usyk Betting Tips – Both men to be knocked down (enhanced odds of 6/1 at William Hill)

Since that TKO defeat to Andy Ruiz Jr in 2019, there have been lingering doubts regarding Joshua’s chin. There are many who feel that the Brit’s ability to eat a punch is a possible Achilles heel. With Usyk likely to throw a lot of volume, AJ is likely to eat his fair share of shots in Saturday’s fight, especially if the fight gets to the middle and later rounds. The longer the fight goes, the more chance there is that Joshua goes down, perhaps not spectacularly mind.

Equally, Usyk won’t have come up against power like AJ’s before. The Ukrainian technician dominated at cruiserweight but facing the IBF, WBO, WBA heavyweight champion on home turf will be a new challenge. If Joshua connects, especially early on, there’s every chance Usyk will go down.

William Hill is offering enhanced odds of 6/1 on both men hitting the canvas at any point during the fight, meaning a £10 bet could pay out £70.

Sportslens readers who sign up and open a new account at William Hill in time for the AJ vs Usyk fight are eligible to receive £30 in free bets, too. This means that it’s possible to wager on any of the aforementioned betting lines in this article and profit £30 in free bets even if your bet loses.

To claim £30 in free bet at William Hill, simply follow the instructions below:

Please do note, however, that this promotion is not available to new accounts depositing funds with Paypal, Neosurf, Paysafe, Neteller, Skrill, ecoPayz, Kalibra/Postpay, or a William Hill PLUS Card.