According to German national daily Bild, out of favour Chelsea midfielder Marko Marin has been subjected to a €5m bid from Bundesliga club Eintracht Frankfurt. The 25 year old German dazzled in his loan spell at Spanish side Sevilla helping the Andalusian club to claim the Europa League title. 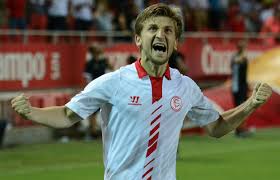 The former Werder Bremen player has failed to muster a starting eleven spot at Stamford Bridge and it appears that his career at the London club is well and truly. Marin has fallen down the pecking order at Chelsea and hasn’t featured under Jose Mourinho thanks to plethora of options in midfield available for the Portuguese manager.

The versatile midfielder who can play on either wings contributed six assists in 29 appearances for Sevilla under Unai Emery. The Europa League winners aren’t willing to sign him on a permanent deal and the player would however want to seek more game time rather than warming the sidelines at Chelsea.

A return to his homeland looks probable with Marin saying, “There are questions, even from the Bundesliga.”

So will Chelsea sell yet another player in the summer? Or does Marin still have a future at Stamford Bridge? Let us know in comments below.