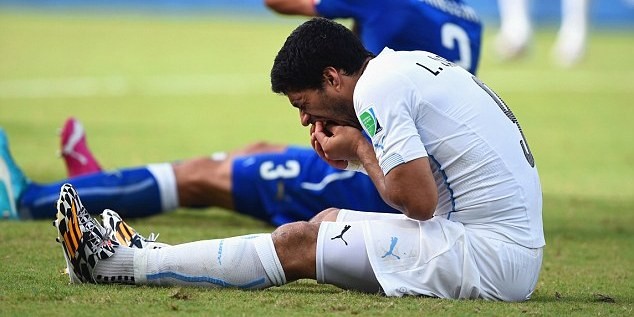 Luis Suarez’s Liverpool career is over after the bite incident, according to the Reds legend Robbie Fowler.

The 27-year-old dug his teeth into the Italian defender Giorgio Chiellini’s shoulders and the incident took place during Uruguay’s narrow 1-0 victory over Italy in the group stage fixture of the 2014 FIFA World Cup.

This is the third time Suarez has been involved in such incidents, with the second one being while he was wearing a Liverpool shirt. In 2013, the Uruguayan international bit Chelsea defender Branislav Ivanović, for which the Football Association handed him a 10-match ban.

The former Liverpool striker believes the Anfield hierarchy will no longer tolerate Suarez’s behaviour and will look to offload him in the summer transfer window.

“Most Liverpool fans love him as a player but he’s continually dragged the club’s name through the mud. It’s not right, especially after how they helped him last time. They tried to rehabilitate him. I wouldn’t be surprised if Suarez left now,” Fowler told Talksport’s Alan Brazil Sports Breakfast show.

“He’s a different person on the pitch. I’m flummoxed, he’s dragged the good name of Liverpool through the mud again, and it’s not right. You can’t defend him. I love him as a player but you cannot condone what he’s done.”

Despite his unethical behaviours, Suarez has been a prolific goal scoring machine. During the 2013-14 season, the former Ajax man was the Premier League’s top scorer with 31 goals from 33 games.

His form has attracted interest from Barcelona in recent times and his father-in-law has also urged him to leave England and join the La Liga club in the upcoming transfer window. However, one need to wait and watch if the Catalan club are still interested in signing Suarez.

Also, at the same time FIFA have started their investigations on the biting incident and will soon reveal the verdict, for which Suarez could face punishment, if proved guilty.