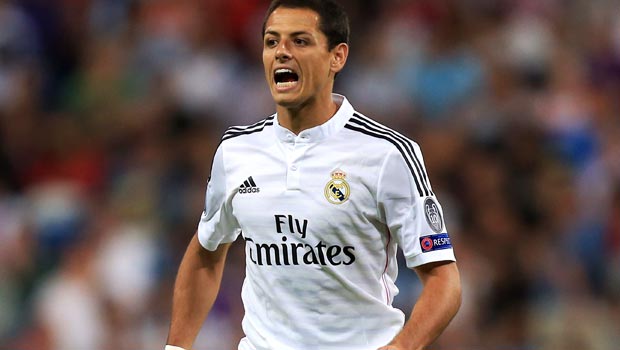 Javier Hernandez is doing everything he possibly can to make his loan move to Real Madrid permanent after scoring four goals in the last four matches for Los Blancos. And it seems Carlo Ancelotti, the Madrid boss, is highly impressed with the Mexican’s recent form.

The 26-year-old joined Madrid from Manchester United on loan in the summer but had struggled to get regular games at Madrid and spent most of the season on the bench.

Hernandez has proved that he could be a useful weapon to have in reserve, but it is widely perceived that he is not wanted by the United boss and would be allowed to leave the club when he returns from loan.

He was drafted into the starting XI following injuries to Karim Benzema and Gareth Bale and he repaid the faith of his manager with some eye-catching performances. The Mexico striker scored the late winner to earn a 1-0 victory over derby rivals Atletico Madrid in the Champions League quarter final on Wednesday before scoring twice in Real Madrid’s 4-2 win over Celta Vigo that kept Los Blancos hot on the heels of leaders Barcelona with five matches left to play.

Madrid have the option to make his season-long loan move to permanent for a fee of 10m Euros, but it’s a highly unlike possibility.

“He’s enjoying the run that he’s on, it’s a really good one,” Ancelotti said. “If Chicharito is in this form he’s non-negotiable. I have a team of non-negotiables but only XI can play and the rest stay on the bench.”

Hernandez should consider moving elsewhere and join a club where he gets regular game time. Recent reports suggest that United are planning to sell him to Southampton, with the Red Devils trying to use him as a part of the deal to lure the highly rated Saints full back Nathaniel Clyne.