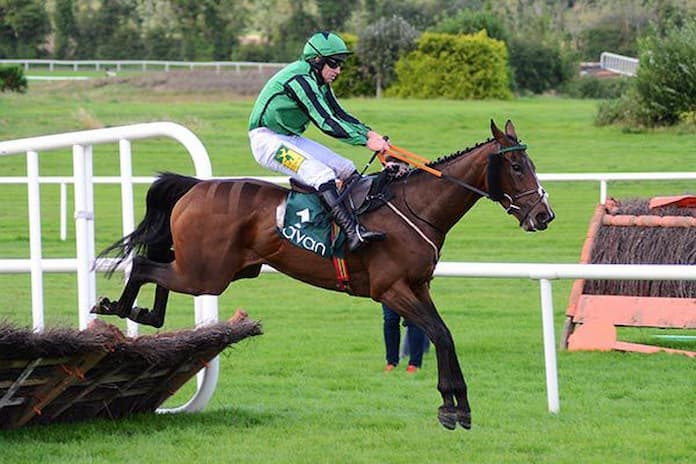 The American Grand National 2022 is one of the highlights this Saturday on the US horse racing front – with an international field of jumpers, that include the Irish-trained Hewick, heading to the Far Hills race meeting in New Jersey for the Grade 1 $250,000 contest.

American Grand National 2022: When Is The Race?

Run over a trip of 2 5/8m over 14 fixed hurdles, the American Grand National is a Grade 1 event for 4+ year-olds and staged at Far Hills race meeting.

The improving chaser was last seen unseating in the Kerry National at Listowel race track on Sept 21 (watch below), but as you can see that unseat came at the final fence and he was still in with a great chance of winning.

With the American Grand National also being run over the fixed hurdles, then this should be a nice confidence booster for Hewick, who has also won three times over the smaller obstacles.

Prior to that Kerry National run, Hewick, who cost just €800, was a nice winner of the Galway Plate over 2m 6 1/2f back in July and in April was the hero of the bet365 Gold Cup at Sandown racecourse (watch below) over 3m5f.

Therefore, we know Hewick stays a lot further than the American Grand National trip of 2m5f that the Far Hills race meeting presents, while at the age of just 7 (young for jumpers) there should be a fair bit more to come from this Irish horse. He looks the class act and the clear one to beat ahead of this Saturday’s big Far Hills contest.

SNAP DECISION – Looks one of the main hopes for the US-based barns. From the Jack Fisher team that won the American Grand National at Far Hills race meeting in 2017 (Mr Hot Stuff), this 8 year-old has won 13 of his 36 starts and was a fair second behind Noah And The Ark (beaten 9 lengths) last time at Belmont Park in the Grade 1 Lonesome Glory Handicap (Sept 15).

Prior to that run Snap Decision was a tidy winner of the Jonathan Sheppard G1 Hurdle at Saratoga on Aug 17 (watch below).

GLOBAL CITIZEN – From the Ben Pauling yard in the UK, this 10 year-old has won 4 of his 16 starts over hurdles and also took the 2022 Johnny Henderson Grand Annual Chase at the Cheltenham Festival (watch below). A useful sort on his day but would be stepping up in trip for the first time to this 2m5f distance, which is the unknown.

NOAH AND THE ARK – Beat Snap Decision in the Lonesome Glory G1 Hurdle at Belmont on Sept 15 (watch below) and is another of the US-trained runners that has a chance of upsetting the likely American Grand National favorite Hewick. That last win for this Todd McKenna 8 year-old also came off a 481-day break so can be expected to have improved a fair bit for it. Last year’s Lonesome Glory Hurdle winner – The Mean Queen – went onto win the American Grand National.

ASK PADDINGTON – Trained by Keri Brion and last seen running third in the, already mentioned, Lonesome Glory Handicap Hurdle (watch above). Formerly housed in the UK with Rebecca Menzies, this 8 year-old was having his first start for his US barn in that last race.

PISTOL WHIPPED – Formerly with the Nicky Henderson yard that won this race in 2019, but has since moved to the US barn of Leslie F Young. Pulled up last time in the AP Smithwick Memorial Steeplechase at Saratoga on July 20, but that came over 2m 1/2f and with his better form over longer the step up in distance here is likely to suit this 8 year-old better.

SONG FOR SOMEONE – Another former UK-trained runner when with Tom Symonds. Has since been transferred to the Leslie F Young team and is another that ran in the Lonesome Glory, when 4th and 9 3/4 lengths back from the winner Noah And The Ark.

MOSCATO – A further runner from the Jack Fisher barn. This 11 year-old is no spring chicken and has a bit to find with Snap Decision after running 13 lengths 4th to that horse last time at Percy Warner Park on May 14.

BELFAST BANTER – Former Cheltenham Festival winner, when landing the 2021 County Hurdle (watch below). Has only won once since though (7 races) but has been moved to the US yard of Cyril Murphy, who have a fine record in this race. The Murphy team have won 2 of the last 6 American Grand Nationals, but Belfast Banter was over 55 lengths adrift of Noah And The Ark last time at Belmont (watch above) in the Lonesome Glory and before that 17 lengths behind Snap Decision at Saratoga.

The Cyrill Murphy yard have won two of the last 6 runnings of the American Grand National, but in recent times the race has also become a popular target for the UK and Irish yards, where jump racing is a very popular horse racing discipline.

In 2019 we saw the Nicky Henderson stable win the race with Brain Power (Nico de Boinville rode), while in 2018 Gordon Elliott, who has won the English Grand National at Aintree three times, took the honours with Jury Duty.

DID YOU KNOW? Trainer Cyril Murphy has won 2 of the last 6 American Grand Nationals