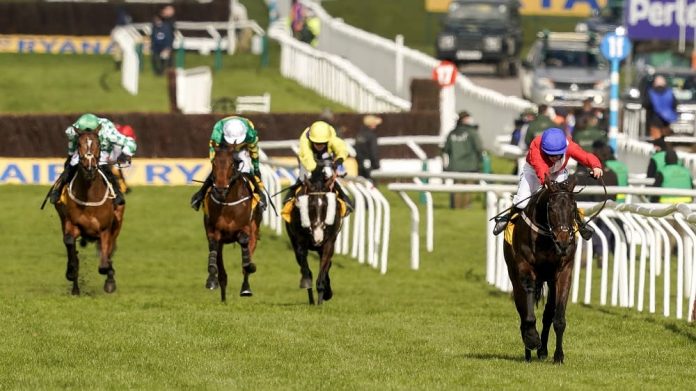 Allaho horse racing Ryanair Chase odds shortened into 5/4 and his status as favourite hardened following victory at Thurles. His trainer Willie Mullins has won the extended 2m 4f Cheltenham Festival contest four times since 2016. That includes the previous two renewals and winning it with this horse last term.

Owned by Cheveley Park Stud, Allaho made light work of the Grade 2 Horse & Jockey Hotel Chase (formerly the Kinloch Brae) with a straightforward success under Paul Townend. He made all for consecutive victories in the race that served as his successful Cheltenham Festival prep 12 months ago.

Allaho confirmed last year’s Ryanair Chase placings and this season’s John Durkan form with Fakir D’Oudairies with a 12-length win eased down. That repeat performance left horse racing betting sites fearing him and handler Mullins delighted. “He’s a big horse,” the trainer said of Allaho. “We have had some huge horses over the years – Douvan, Monkfish and him. Some of those big horses cannot adjust at fences, but he can and danced in front of a couple. He does it very easily.”

At the time of Allaho’s Thurles romp, Bet365 are the only Cheltenham non runner no bet bookie with the Ryanair Chase odds and ante post market. That means punters who back him with them are guaranteed a run for their money or the stake back. Other firms have Allaho as short as Evens but the 5/4 with Bet365 is the industry-leading price.

Only one horse has won the Ryanair Chase on multiple occasions since it became part of the Festival programme and Cheltenham betting in 2005. That was Albertas Run in 2010 and 2011. Allaho now bids to do something illustrious past stable companions Un De Sceaux and Min couldn’t, and land back-to-back renewals.

Going on from Thurles to follow-up at the Festival puts him in very good company. Both Don Cossack (2016) and Sizing John (2017) won that race and then the Cheltenham Gold Cup. Newmill also scored there in 2006 en route to Queen Mother Champion Chase glory.

Besides NRNB terms, Bet365 also go Best Odds Guaranteed with their Ryanair Chase odds and betting. If Allaho were to drift out to a bigger starting price (SP) on the day, punters would get that. At the moment, and on the evidence of his Punchestown and Thurles wins, it’s going to be a tall order for any horse to stop him retaining his Cheltenham crown.

Bet on the Ryanair Chase odds at Bet365

On the concluding day of the inaugural Lingfield Winter Million meeting, Dan Skelton saw Ballygrifincottage earn a 25/1 quote with Bet365 for the Albert Bartlett at the Festival following a win over 2m 7f. It was just his second start for the stable after landing three of his four Irish Point-to-Points.

New connections must like Ballygrifincottage a lot. The Skelton team pitched him straight into a Grade 2 Albert Bartlett Trial, the Bristol Novices Hurdle, at Cheltenham on stable and Rules debut in December. He shaped as if needing the run when fading late on and finishing third behind Blazing Khal and Gelino Bello.

However, Ballygrifincottage clearly came on for his reappearance with a cosy success at Lingfield. He won going away from Warren Greatrex runner High Stakes. Now that all major betting sites‘ ante post Albert Bartlett favourite Blazing Khal has been ruled out of the Festival by trainer Charles Byrnes, there may be renewed betting interest.

Back Ballygrifincottage for the Albert Bartlett with Bet365