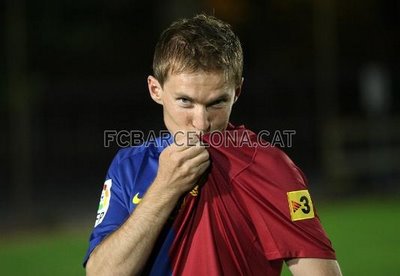 Arsenal secured a 3-0 win over Belarusian Premier League outfit BATE Borisov at the Emirates Stadium in the second-leg of their Europa League last-32 clash on Thursday night, booking a spot in the last-16 after winning 3-1 on aggregate.

An own goal from Zakhar Volkov in the fourth minute saw the Gunners draw level, while Shkodran Mustafi and Sokratis Papastathopoulos finished the job later on.

The hosts proved too much to handle for BATE, and while the players would have been gutted after putting in an impressive performance a week ago, one of them is happy with the reception he received at the Emirates.

Former Arsenal midfielder Alexander Hleb returned to north London since leaving in 2008, and was substituted on in the 58th minute.

The home fans were glad to see the 37-year-old, and he couldn’t help but react to the warm reception he received post-game.

“This is unbelievable… thank you very much for the support. I’ll never forget this – Arsenal is always in my heart!” ?

Hleb spent three years at Arsenal after arriving from VfB Stuttgart in the summer of 2005, making 130 appearances across all competitions and scoring 10 goals.

The Belarusian legend signed a four-year deal with Barcelona afterwards, but could only feature in 19 league games in his first season at the star-studded side before returning to Stuttgart on loan.

Hleb spent the last two years of his deal on loan at Birmingham City and Wolfsburg, finally returning to his childhood club in 2012.

He is in his fifth stint with BATE having turned to somewhat of a journey man throughout his career, but Arsenal remain dear to him as he came into limelight at the Emirates.