It seems David Moyes prefers a one-eyed Valencia over the likes of Ashley Young, with the Ecuadorian playing the majority of his side’s 3-0 Champions League win over Olympiakos sporting a huge swollen eye, posting a picture of the damage in the aftermath. 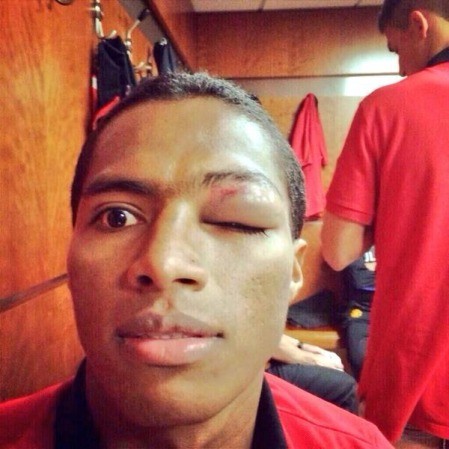 Valencia contrived to head the top of an Olympiakos attacker’s noggin in the first half of last night’s stunning Last 16 win at Old Trafford, with the winger somehow playing on despite being practically blinded in one eye due to the swelling.

The 28-year-old continued on until the 77 minute, when Moyes finally introduced Ashley Young, proving quite clearly how highly the Scot regards his South American attacker.

Commitment was called for, and Valencia gave it, and United fans will surely be proud of their man for pushing through the pain, and physical impairment!

I wonder whether the pirate look will come out in force this weekend, eye-patch and all, or if Valencia will be afforded a well deserved break from the action?

What do you think? How highly do you rate Valencia? Let me know in the comments below…