It was only a few weeks ago when Arsenal and Liverpool, along with Manchester City and Chelsea, were fighting for the Premier League title. Arsene Wenger has ruefully dropped out of that battle in recent weeks, but the Frenchman is eager to shake off the competition posed by Brendan Rodgers for the signature of Sevilla’s Federico Fazio. 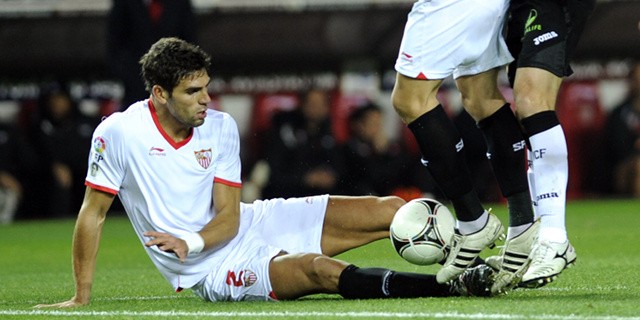 The Argentina international, capped twice by his country, has impressed with solid displays in Andalusia this season and amid interest from Arsenal, Liverpool and several Serie A clubs, his agent Ariel Kipersemid has hinted at a potential summer move, citing a cheap clause in his contract.

“Federico is playing excellently for Sevilla, where he’s been playing since 2007, and has recently extended his own deal with them until June 2018” Kiperszimd told TuttoMercatoWeb.

“Now he’s focused on the season end, then we’ll weigh the offers incoming, together with the club. I can’t reveal the clause set on him by Seville, but it’s a very cheap one for the big clubs which are surveying him.”

Liverpool boss Rodgers has previously made it clear that he wants to strengthen his defense in the summer, with the Northern Irishman dissatisfied with the likes of Kolo Toure, Mamadou Sakho and Daniel Agger.

His main rival in acquiring Argentinian centre-back Fazio, Wenger, is under pressure to spend shrewdly to guide Arsenal beyond the stagnation of fourth-placed Champions League qualification.

What do you think? Where do you think Fazio will end up next season? Get involved in the comments below…