Adrien Rabiot is touted as one of the brightest prospects in world football. The 19-year-old Paris Saint Germain midfielder is one of the stylist young players around and has attracted interests from top Premier League clubs as well. PSG manager Laurent Blanc also believes that the young lad ‘has great potential’ but with only one year remaining on his contract, doubts have begun to surface, whether the talented midfielder could be leaving the Parc des Princes this summer.

In April, The Guardian reported that Chelsea and Arsenal were keeping an eye on him, with the Gunners especially thought to be his long term admirers. Arsenal had sent scout Gilles Grimandi to track the youngster regularly last season. 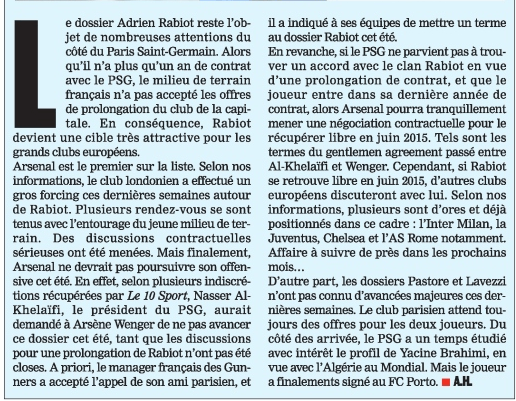 The midfielder reportedly earns £5,000-a-week, but Chelsea were willing to increase his wages to almost 12 times. Now Le 10 Sport in their latest special transfer edition claim that Arsenal have held talks with Rabiot and his representatives recently.

They claim Rabiot’s contract situation remains one of utmost importance for PSG. The player hasn’t accepted the club’s renewal proposals, which makes him a very attractive target for many European clubs. The magazine however adds that although talks have been held with representatives but Arsenal are not likely to go through with this deal.