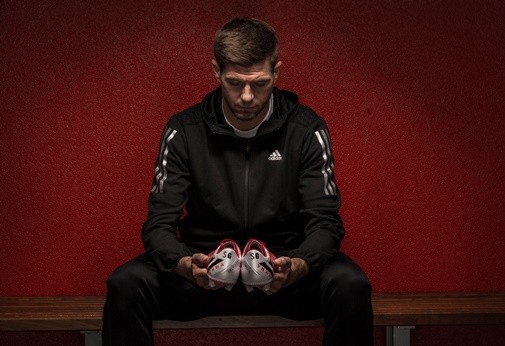 Liverpool will face Crystal Palace at Anfield on Saturday in the Premier League, where skipper Steven Gerrard is set to make his last home appearance.

To make the event all the more memorable, Adidas has revealed a special edition Predator instinct boot to celebrate Gerrard’s 17-years of tireless dedication to the Liverpool football club.

The pair of boots are designed to show his unbreakable bond with the city. Gerrard has been loyal to his boyhood club and has graced the Anfield turf in Adidas Predator’s for nearly two decades.

The eye-catching contrast of red and white colours and overall classy design feeds out from a central visual element on the outer heel – YNWA – You will Never Walk Alone – the message that reflects the club ethos that Gerrard has lived by throughout his career.

Personal detailing are equally brilliant – the number 8 and the names of his children are emblazoned on the boots.

In his long and illustrious career at Liverpool, he has made over 700 appearances and scored 183 goals for the club. He made his international debut for England in 2000 and made 114 appearances for The Three Lions.