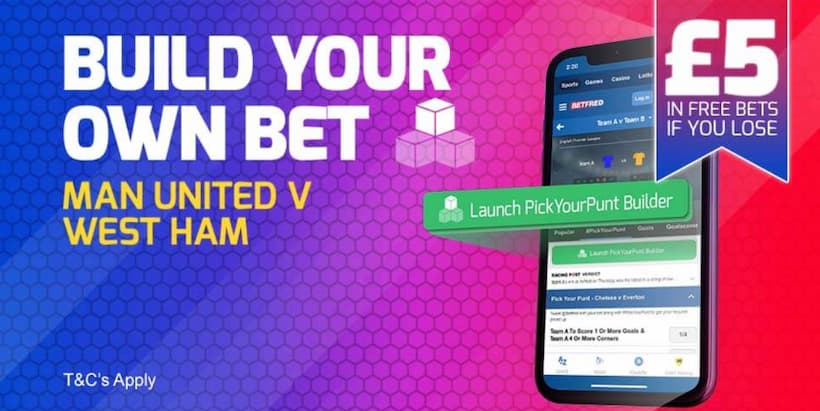 Manchester United play West Ham in the Carabou Cup tonight, and Betfred is offering a £5 risk-free bet. Our betting expert details how to claim this exclusive offer and offers some Pick Your Punt tips for the game.

For tonight’s Carabou Cup clash between Manchester United and West Ham United, Betfred has a special offer for all sportslens readers: any losing bet made on the Pick Your Own Punt feature will be refunded up to the value of £5. This in effect means that you get to place a free bet on the match! Anyone who currently has an account at Betfred is eligible to receive this free bet.

To find out more about how to get yourself signed up at Betfred and claim this £5 risk-free bet on Man U vs West Ham, and to see our own Pick Your Punt football betting tips for tonight’s big match, read on:

Build Your Own Bet: £5 Risk-Free Bet if you lose at Betfred

Betfred’s latest offer is simple and effective: if you place a £5 bet on the Build Your Own Punt (ACCA) and lose, Betfred will reimburse you up to the value of £5 in bet credits.
In order to claim this special promotion, follow the simple steps below:

This exclusive offer is only available Wednesday, September 22 for the Manchester United vs West Ham Carabou Cup game.

If you’re interested in the free £5 bet but less sure of what to bet on using Betfred’s Pick Your Own Punt feature, read on since our betting expert has an exclusive 3-leg football betting tip for Man U vs West Ham:

In the EPL encounter last Sunday, Manchester United peppered the West Ham goal with 17 shots, including 10 that were on target, scoring 2 goals. Ole Gunnar Solskjaer’s team should probably have been awarded at least one penalty, too after Ronaldo was fouled in the box. United also racked up a season-high 11 corners during the match.

It’s likely to be a very different Man U first Xl that takes the field at Old Trafford tonight, but with the likes of Jaden Sancho, Anthony Martial, Donny Van de Beek, Anthony Elanga, and Edison Cavani needing minutes, it’s still likely that the Red Devils score twice at home and force at least half the number of corners as they did just three days ago.

Andriy Yarmolenko came on as a substitute for the Hammers in the 2-1 defeat to United at the weekend and flattered to deceive, causing West Ham boss David Moyes to yell instructions out to him on several occasions. The Ukrainian’s quality is never in question, however: Yarmolenko has one of the sweetest left pegs in all of world football and, with a chip on his shoulder, we’re backing the 31-year-old to both score and be a real handful for Alex Telles on United’s right flank tonight.

Any Manchester United Player To Score A Direct Freekick (6/1)

It’s hard to select which United player will score this evening as there are so many attacking options in the squad in need of minutes – we simply do not know who will start. One thing we do know, however, is that United’s likely B-team features a host of players who can score from DFKs: Alex Telles, Edison Cavani, Diogo Dalot, Donny Van de Beek, Jese Lingard, and probably a few others all fancy themselves as set-piece specialists and, with these players eager to impress, we just feel there’s a chance of a free-kick goal this evening.

If you wager on these three potential outcomes using Betfred‘s Pick Your Punt feature, the potential value of a £5 bet is £85.

And remember, if it doesn’t come off, you get your £5 outlay back anyway, meaning you can’t really lose!

To claim this exclusive deal, follow these simple steps:

By taking advantage of both of these deals, you can, in essence, place a losing £15 ACCA on Manchester United vs West Ham, and still wake up on Thursday morning to find £35 in bet credits in your account!