Manchester United had a fantastic start to the game, with Heinze scoring what can be called a lucky goal and Saha and Solskjaer nipping in with smash & grab goals, both well taken and owing a lot to the initial passes (Ferdinand and Richardson, respectively).

For a second-string team (Only Rio and VDS (and Saha, if Larsson is not around) would make the first team), it wasn’t a bad start.

Reading pulled one back in the first half but it after that start it was hard to see anything else but a Manchester United win. Imagine what would have happened had Ferguson decided to send on his big guns – Scholes, Ronaldo and Rooney, all sitting on the bench – one by one after the 3rd goal? 10 goals? Federici would have died of shame. 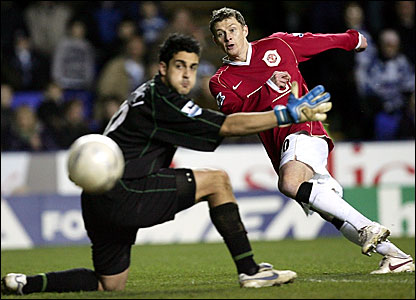 He may still do so. The first goal wriggled away from under him, a horrible piece of keeping. The second, Saha’s strike from the left, was as much due to Saha’s rare accuracy (9th goal this season?) as it was due to bad keeping and worse positioning. The Reading keeper should have blocked that, no two questions about it.

The third – well, Ole was in acres of space, and had plenty of time to put it away. He chose to place it, and Federici could have made things easier for himself by rushing out at Solskjaer earlier rather than waiting for him to shoot. As it was, Ole rarely misses these opportunities (a finisher in the classic sense) and Manchester United were 3-1 up, bang bang bang.

Lita (coming on as a sub) scored Reading’s second in the 84th minute, and United’s second string, as they tend to do with Silvestre and Brown around, gave their fans some needless last minutes jitters.

Eventually Manchester United closed out the game with a 3-2 win, the score deservingly close – United had a fantastic start but Reading pushed them all the way.

A special thanks to Fred54 for capping them, and for putting them up on YouTube (wanna take bets on how soon these videos will be taken down?).