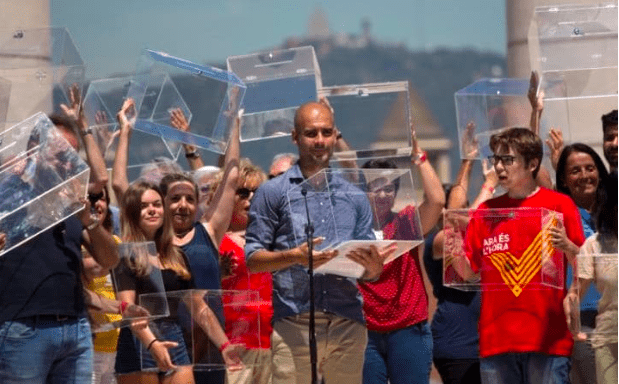 On Friday, the regional government of Catalonia announced that the controversial but long-awaited referendum for its independence from Spain would be held on October 1.

Catalan president, Carles Puigdemont, announced that voters would be posed the formal question: “Do you want Catalonia to be an independent country in the form of a republic?”

On Sunday, Manchester City boss Pep Guardiola addressed a gathering in Barcelona where he propounded the case for a referendum on Catalan independence.

Speaking on the steps of Montjuïc in front of around 40,000 fellow citizens, the former Barcelona manager read out a brief manifesto in Catalan, Spanish and English.

“We Catalans are victims of a state that is carrying out political persecution unworthy of a democracy in 21st Century Europe”, the football star insisted.

“We have tried on 18 occasions to reach an agreement on a referendum and the answer has always been no,” he told the crowd.

“We are here to say clearly that on October 1 we will decide our future, even though the Spanish state doesn’t want us to.

“We have no other option but to vote. We call on the international community to support us and on democrats the world over to help us to defend the rights that are threatened in Catalonia, such as the right of freedom of expression and the right to vote. We appeal to all the democrats of Europe and the world to stand up to the abuses of an authoritarian state”

It must be noted that the Catalonia government’s announcement of a referendum was met with a familiar cold response from Madrid.

“They can announce a referendum as many times as they want … but the referendum is not going to take place,” said Spain’s deputy prime minister, Soraya Sáenz de Santamaría.

Pep Guardiola, born in the central Catalonian town of Santpedor, has been one of the movement’s  biggest prominent face. So far, he had only symbolically lent his name to the movement and hasn’t spoken publicly on the matter on many occasions, until now. His public stance would have never felt more important for Catalonia.