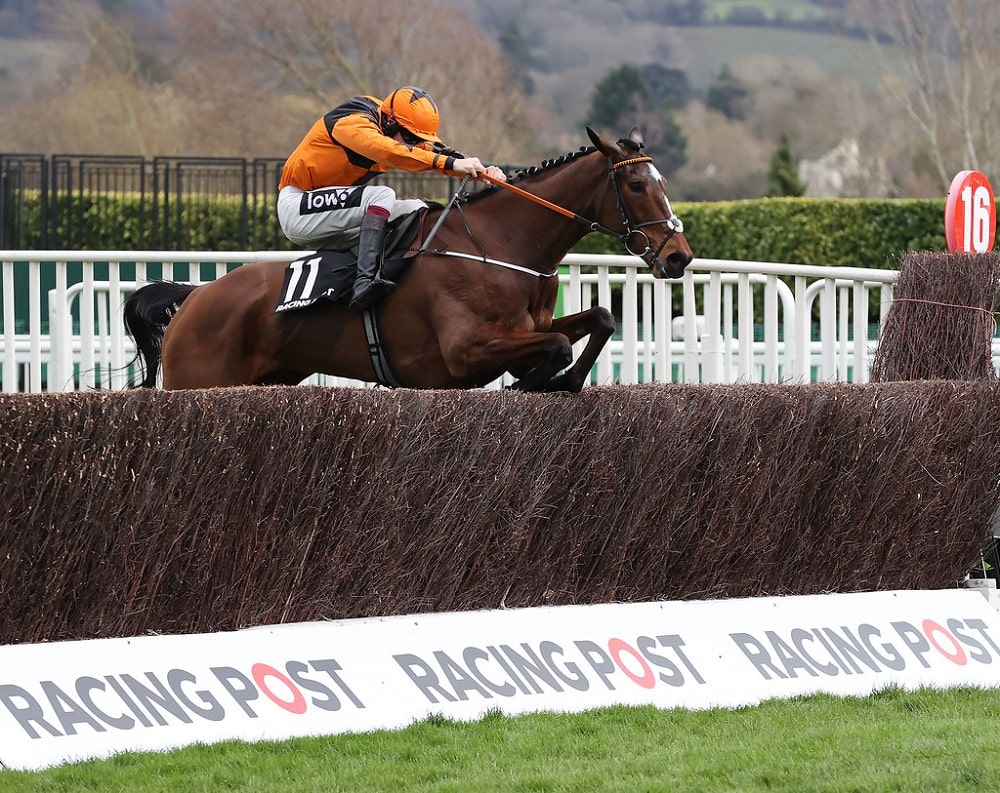 The Grade 2 Shloer Chase over 2m is the feature race on the third and final day of Cheltenham’s November Meeting on Sunday, 14 November (2:20). Four previous course and distance winners should run in this year’s renewal, so it promises to be a cracker. See who SportsLens experts fancy in this detailed race preview.

All bar one of the six initial entries haven’t had a run but that’s no problem. Nine of the 12 past Shloer Chase winners landed the spoils on their reappearance. Eight successful horses since the race was introduced in 2009 have aged six, seven or eight. This event is for equine athletes in their prime, then.

Favourites have a 50 per cent success rate in the Shloer Chase at Cheltenham, so backing the market leader on horse racing betting sites could be the way to go. Nine of the dozen victors had official ratings of at least 155, so it’s no wonder this race attracts classy two-milers. Enough trends! Who do our tipsters fancy?

There is just something about Cheltenham that has brought out the best in Henry De Bromhead mare Put The Kettle On. The seven-year-old daughter of Stowaway is four from four over the Shloer Chase course and distance. Wins in the Arkle Trial, then Arkle itself, this race last year and then the Queen Mother Champion Chase at the Festival mean Put The Kettle On is a real track specialist.

As the old saying goes, there are horses for courses. Put The Kettle On appears to be exactly that in relation to the Old Course over 2m at Cheltenham. Perhaps in the shadow of stable companion and fellow mare Honeysuckle, she doesn’t always get the credit she deserves. Put The Kettle On receives weight all-round from the opposition here too.

That is the value of a sex allowance for mares. Some of it is offset by her Grade 1 triumph at the Festival, but Put The Kettle On comes alive here. There is no obvious reason why she shouldn’t win the Shloer Chase on reappearance again. Put The Kettle On can’t be anything other than the 7/4 favourite with Betfred for a fifth victory at this venue.

Back Put The Kettle On with Betfred

Spanish-bred gelding Nube Negra proved a revelation last season for trainer Dan Skelton. He chased home Put The Kettle On in the Champion Chase with half-a-length to find on the same terms here. The seven-year-old son of Dink defeated the mighty Altior on reappearance in the Desert Orchid Chase at Kempton last Christmas before that.

Although Chacun Pour Soi reversed Cheltenham form with Nube Negra at the Punchestown Festival, it was his first start in Ireland. This was also a bold move from Team Skelton going over to the Emerald Isle. Nube Negra still hit the frame in third behind runaway Ryanair Chase hero Allaho, so that is top form as well.

Whereas Put The Kettle On has Cheltenham form figures of 1111, those for Skelton’s runner read 2382. Nube Negra hasn’t got his head in front at the home of jumps racing yet, but looks the one more likely to capitalise if the favourite doesn’t turn up. That is why William Hill are a standout 2/1 about his chances here.

Sky Pirate steps up in class

Jonjo O’Neill had a tough choice to make with Sky Pirate last spring. The eight-year-old Midnight Legend gelding still qualified as a novice, so could either run in the Arkle or the Grand Annual Handicap Chase. Connections chose the latter despite a welter burden of 11st 6lb and Sky Pirate prevailed by a short-head.

As the Cheltenham Festival programme changed, the Grand Annual moved from the New Course to the Old Course. That makes Sky Pirate a course and distance winner for the Shloer Chase here, then. Unlike his rivals, he also has the benefit of a run under his belt. That came here at The Showcase Meeting in October, where Sky Pirate faced an impossible tasking conceding a whopping 23lb to half-brother Before Midnight.

Off an official rating of 159, it has to be graded races and not handicaps for him now. Sky Pirate’s two runs at Warwick before Cheltenham also read well. Edward Courage Cup runner-up Amoola Gold has come out and won a Listed prize at Ascot this autumn.

Sky Pirate also chased home Allmankind, who has added two further Grade 2 victories to his CV, in the Kingmaker. He’s earned a crack at this level, then. The bookies don’t know what to make of Sky Pirate as he ranges in price from 3/1 up to 9/2 for this.

Champion trainer Paul Nicholls has a magnificent servant in Politologue and he has a good record first time out. Now aged 10, this popular grey owned by John Hales only has one win from seven career starts at Cheltenham. There will always be an asterisk next to Politologue’s 2020 Champion Chase victory, because of late withdrawals by Altior and Chacun Pour Soi.

However, he could do no more than beat the opposition in front of him. The Shloer Chase field is probably deeper than the diminished one Politologue faced that day, however. Nicholls insists the key to his horse is freshness, but there is also one eye on trying for a third Tingle Creek at Sandown.

Poltiologue is the oldest in this line-up and open to the last improvement. His handler saved him for Aintree’s Melling Chase in the spring but he ran well below par. An examination after the race found Politologue had bled. As he is past his prime, there are reasons to take on this official ratings topper.

Nicholls also has new recruit Rouge Vif entered. Owned by Kate and Andrew Brooks, this seven-year-old son of Sageburg won a handicap over course and distance on reappearance last term. It didn’t get any better than that for Rouge Vif, however, as he was behind Politologue in the Tingle Creek and then beaten further by Nube Negra.

He also finished last of the nine in the Champion Chase. This demands more than a handicap, so Rouge Vif needs to improve for leaving the Harry Whittington yard and going to Ditcheat. If any trainer can bring out the best in a horse, however, then it’s surely Nicholls. Rouge Vif is 7/1 with Betfred here as a result.

Bet on Rouge Vif with Betfred