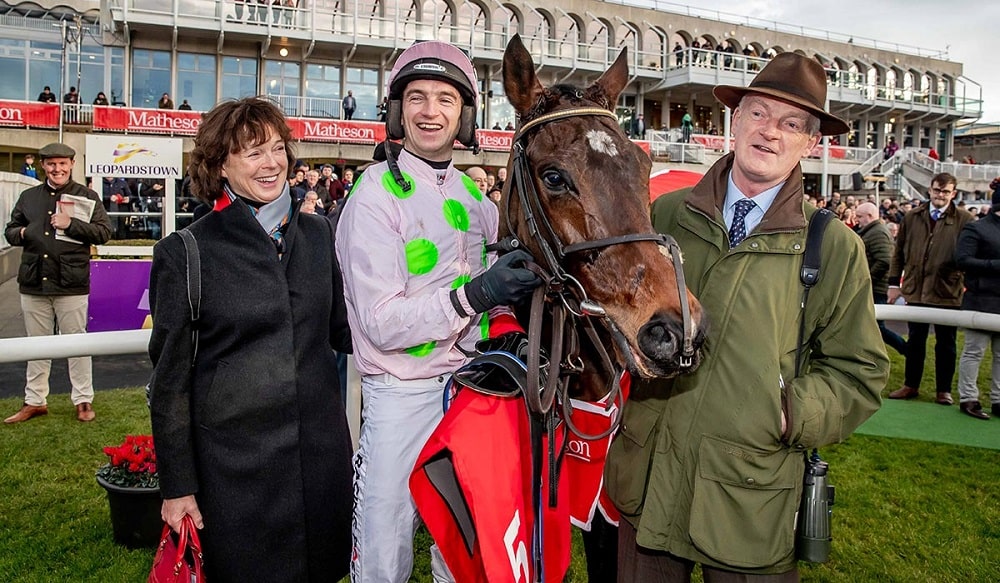 The 2m Unibet Morgiana Hurdle is the first Grade 1 over the smaller obstacles of the jumps season in Ireland at Punchestown on Sunday, 14 November (2:05). It’s a race that master trainer Willie Mullins boasts a phenomenal record in.

Nine of the last 10 Morgiana Hurdle winners came from his Closutton stables. Half of the last dozen victors were favourites too, so siding with the market leader has its upside here. Eight of the previous 12 winners landed the spoils on reappearance.

Only the top 2m hurdlers in Ireland are usually good enough to win this. All of the last 12 successful horses had an official rating of 155 or higher. That rules out a few of the runners from the penultimate declaration stage, but if only it was as simple as that…

Why Echoes In Rain has the shortest Morgiana Hurdle odds

If the above trend were taken literally, then ante post favourite Echoes In Rain would have no chance. There is a sense, however, that Mullins has a mare on a serious upward curve on his hands. This five-year-old daughter of Epsom Derby winner Authorized made miraculous progress in the spring, winning top graded novice races outside of her own sex.

Echoes In Rain was eight lengths too good for Belfast Banter at Naas in February. The runner-up has since plundered the County Hurdle at the Cheltenham Festival and landed the Grade 1 Top Novices’ Hurdle during the Aintree Grand National meeting. Those in-behind have also won subsequent races, so the form looks strong.

As Echoes In Rain was even more impressive when bolting up by 15 lengths at Fairyhouse over Easter, she earned a crack at the highest level. She confirmed that form in a Punchestown Festival Grade 1 with Colonel Mustard too. On the face of it, though, a 143 rating isn’t good enough to win the Morgiana Hurdle.

However, Echoes In Rain gets a sex allowance from the geldings. She may continue her hot streak, but the keenness she shows in her races could be a problem. This is her first start outside of open novice events and there are horses within her own stable on marks in the 160s. Echoes In Rain is perhaps priced on potential at Evens with William Hill, but it’s no surprise that horse racing betting sites have her as ante post favourite.

Bet on Echoes In Rain with William Hill

Dual Champion Hurdle runner-up Sharjah sets the standard here off a 164 rating. Mullins has often waited until winter before unleashing the eight-year-old Doctor Dino gelding but gives him an entry. On three of his four starts last season, Sharjah bumped into unbeaten wonder-mare Honeysuckle. Giving her 7lb is a thankless task.

Honeysuckle isn’t in the Morgiana Hurdle, though, so Sharjah may be given the chance to show what he can do. His record at Punchestown is only one win from four. That came in this race three years ago, however, when he lowered the colours of erstwhile owner-stable companion Faugheen. If turning up, Sharjah commands tons of respect and he’s 100/30 with BoyleSports for a second win in the race.

Another previous victor for Mullins, Saldier, could run instead of or alongside Sharjah. He landed the spoils here in 2019 and has won three of his four starts since the Punchestown Festival across both codes. Saldier, a seven-year-old son of Soldier Hollow, also carries the silks of Rich and Susannah Ricci.

After winning on the Flat at Listowel and running with credit under a welter burden at Royal Ascot, he defied top weight in the Galway Hurdle. Saldier beat Scottish Champion Hurdle hero Milkwood by a couple of lengths and had Cape Gentleman just a further head behind in third. The latter has since won two novice chases too.

The Saldier of old may be back. He has been hit and miss since a horrible fall in the 2018 Fishery Lane Hurdle won by the ill-fated Espoir D’Allen. A repeat of his Galway Hurdle heroics would probably win this, though. Saldier is 9/2 with BoyleSports for a second Morgiana Hurdle success.

Back Sharjah and/or Saldier with BoyleSports

Gordon Elliott is the only other trainer to have won this in the last decade. That was with Abacadabras 12 months ago. He may return to Punchestown to defend his crown, but this year’s race looks much deeper on paper. Owned by Gigginstown House Stud, Abacadabras is a seven-year-old Davidoff gelding who couldn’t follow-up on his triumph here.

He twice suffered defeats at Leopardstown in the Matheson Hurdle and Irish Champion during the Dublin Racing Festival. Abacadabras then fell at the third flight in the Champion Hurdle at Cheltenham, but proved no worse for the tumble. When stepped up to 2m 4f for the Aintree Hurdle, he bagged another Grade 1 prize.

That form has been advertised by the runner-up, Buzz, coming out and winning the Cesarewitch on the Flat. However, when dropped back for the Punchestown Champion Hurdle, Abacadabras missed the frame and only ran fourth behind Honeysuckle and Sharjah. It may be that he now wants a longer trip than 2m and his stamina-laden pedigree supports that theory. Abacadabras is 5/1 with William Hill for a successful defence.

Bet on Abacadabras with William Hill

Elliott could also run WKD Hurdle scorer Zanahiyr in the contest. Four-year-olds stepping out of juvenile company get no allowances here, so it won’t be easy for the Nathaniel gelding. Zanahiyr progressed through the grades last term and landed the Knight Frank at Leopardstown’s Christmas Festival.

Connections then skipped the Dublin Racing Festival and went to Cheltenham on the back of an 83-day break. Zanahiyr only ran fourth in the Triumph Hurdle there, not able to go the pace. Perhaps in hindsight, he should have had one more run in-between. He stripped fitter for Cheltenham, however, when runner-up at the Punchestown Festival.

There were excuses that day for Zanahiyr as he got hampered on the home turn. He looked as good as ever when bolting up by eight lengths at Down Royal in the WKD Hurdle on reappearance, though. If contesting the Morgiana Hurdle this year, then Zanahiyr has a quick turnaround of 16 days to deal with. He ranges in price from 10/1 down to 6/1 to follow-up here.

Stormy Ireland completes the Mullins entries in the race but she’s better over further. It was remarkable how the seven-year-old Motivator mare made a miraculous return to the stable after her previous owner moved her to Paul Nicholls’ yard. Stormy Ireland bolted up in the old Irish Strawberry Hurdle and Mares Champion at Punchestown, but this is deeper water and a trip sharp of her best.