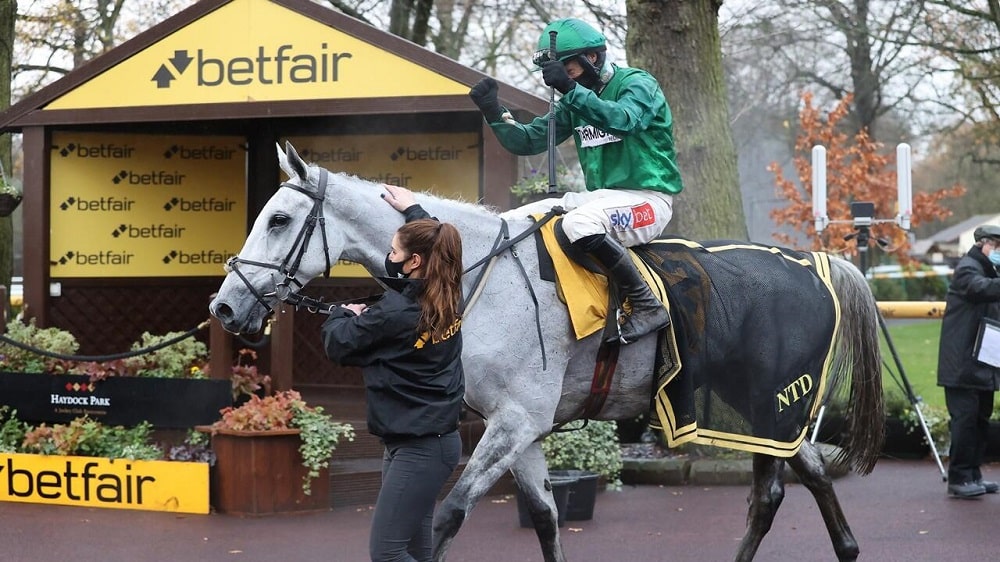 The first Grade 1 of the British jumps season is the extended 3m 1f Betfair Chase at Haydock Park. This year’s renewal takes place on Saturday, 20 November (3:00) with a field of eight declared to run on Merseyside. SportsLens experts give their 2021 Betfair Chase tips here.

Before we dive into those, however, there are stats that punters should remember ahead of placing any bets on horse racing betting sites on their fancies. Repeat Betfair Chase winners have been quite common since the inaugural running of the race in 2005. The great Kauto Star had four victories in this, while Cue Card enjoyed three successes. There’s more on another multiple winner of the race, a certain Bristol De Mai below.

Any good Betfair Chase preview highlights the success that trainers Paul Nicholls and Nigel Twiston-Davies have had in this event. Ditcheat maestro Nicholls saddled two horses to six victories combined. A couple of Twiston-Davies runners boast four wins in the race between them. Multiple winners apart, one of the key Betfair Chase trends that may be worth following is the record of horses aged between six and nine.

That accounts for 10 of the last 12 Betfair Chase winners but rules out few of this year’s runners. Going to Haydock fresh is not necessarily an advantage, meanwhile. Seven of the previous nine Betfair Chase results show the winner coming into the race off the back of a previous run. Race fitness may have a part to play, although all but two of this year’s field make their reappearance. See the 2021 Betfair Chase tips below.

Why A Plus Tard has the shortest Betfair Chase odds

Irish trainer Henry De Bromhead has an embarrassment of riches in the staying steeplechase division, so A Plus Tard heads the market on all major betting sites here. The reason for that is very simple. This Cheveley Park Stud owned seven-year-old won the Savills Chase at Leopardstown last Christmas and then chased home stable companion Minella Indo in the Cheltenham Gold Cup. That is without question leading form.

Frodon, home in fifth at Cheltenham, has since come out and won the Down Royal Champion Chase. There is no reason why the re-opposing Gold Cup sixth Royale Pagaille should trouble A Plus Tard either. Looking at his Savills Chase success, he beat subsequent Irish Gold Cup hero Kemboy by half-a-length and then confirmed the form at Cheltenham.

A Plus Tard had owner companion Allaho beaten 20 lengths in fourth around Leopardstown, but that one came out and bolted up in the Ryanair Chase when dropped down in trip at the Festival. That Savills Chase win on yielding ground looks similar going to conditions for the Betfair Chase Haydock forecasts. A Plus Tard remains relatively unexposed as a stayer after just three career starts at 3m and beyond too.

The son of Kapgarde has a mixed record fresh but should now be in his prime. All roads lead back to the Cheltenham Festival with the aim of going one better in the Gold Cup. A Plus Tard is the shortest of these in the ante-post betting for the blue riband event of steeplechasing. That mirrors Betfair Chase odds of 6/4 with Bet365, and his claims are obvious.

Bet on A Plus Tard with Bet365

If ever there was a Haydock specialist, then Bristol De Mai fits the bill. Past Betfair Chase results over the last four years read 1121 for the Twiston-Davies runner. Owned by Simon Munir and Isaac Souede, Bristol De Mai is 10 now but his fabulous record at this venue speaks for itself. The popular grey gelding by Saddler Maker has five wins from six career starts at the track.

This is the equivalent of the Gold Cup for Bristol De Mai and his whole campaign has been geared around it for some years. When winning the race for the first time back in 2017, he demolished fellow three-time victor Cue Card by 57 lengths. Bristol De Mai returned to Haydock and retained his crown 12 months later with a four-length success over Native River.

The only blemish on his Haydock record came in 2019 when Lostintranslation pounced at the last. Bristol De Mai was still home some 25 lengths in front of Frodon, who also won last season’s King George at Kempton. Bristol De Mai turned the tables on Lostintranslation 12 months ago, holding subsequent Aintree Bowl and Punchestown Gold Cup hero Clan Des Obeaux by a couple of lengths.

On the pick of his form, Bristol De Mai looks a value alternative to A Plus Tard. This is his track and connections have kept him lightly-raced in recent years. The only slight concern is a sounder surface than his most impressive wins. Bristol De Mai has handled better ground before, though, so rates a real danger and is top of our Betfair Chase tips at 7/2 with BoyleSports here.

Back Bristol De Mai with BoyleSports

Next Destination an each way alternative

Given the fabulous record Nicholls has with Betfair Chase winners, it would be foolish to ignore Next Destination. The nine-year-old made up for lost time in a big way last season following a couple of years off the track. A fine novice chase campaign saw Next Destination land Grade 2s at Newbury and Warwick either side of Christmas. He was also far from disgraced when chasing home Galvin in the National Hunt Chase.

The winner has since gone in again at Punchestown and given Frodon a race to be second at Down Royal. Snow Leopardess, back in fourth at Cheltenham, has also come out and won this season alongside the eighth home, Eden Du Houx. Looking back at Next Destination’s Warwick run, Fiddlerontheroof has done plenty to advertise that form too with the runner-up filling the same spot behind Monkfish at the Festival.

He also landed the Colin Parker at Carlisle, a stepping stone Listed intermediate race always targeted by useful types. Next Destination has to step up on his novice campaign and official ratings but remains lightly-raced for his age. This is an acid test of his credentials, yet he’s in the right hands for it. Betfair Chase odds of 15/2 with Bet365 look well worth considering each way as a result.

Back Next Destination each way with Bet365

Waiting Patiently has joined ambitious, up-and-coming trainer Christian Williams. He fancies the chances of his new recruit, but the fact remains it’s been well over three-and-a-half years since this horse won a race. Waiting Patiently was always consistent in his runs for Ruth Jefferson and he may have more to offer over this trip. The 10-year-old looks plenty short enough at 7/1 with BoyleSports, however.

Kim Bailey sends Imperial Aura up to Haydock off the back of two disappointing runs at the end of his last campaign. His defeat of Galvin at the 2020 Cheltenham Festival reads well in relation to this, but he unseated David Bass early on when sent off favourite for the Silviniaco Conti Chase at Kempton and was then pulled-up in the Ryanair. As Imperial Aura bled that day, punters should be wary of the eight-year-old.

Venetia Williams declared Royale Pagaille, who is two from two at this track, but the ground is nowhere near soft enough at the time of writing. It wouldn’t be a shock if Rich and Susannah Ricci’s seven-year-old Peter Marsh winner gets taken out of the race. These look deep waters for Tom George runner Clondaw Castle, meanwhile, who was a distant third in the Charlie Hall Chase at Wetherby last time out.

Wily Irish trainer Mick Winters has Chatham Street Lad stepping out of handicap company here. Although his Caspian Caviar Gold Cup success was recently advertised by the runner-up Midnight Shadow at the Cheltenham November Meeting, this requires a career best. The Betfair Chase has attracted relatively good numbers but doesn’t look the strongest race on paper.