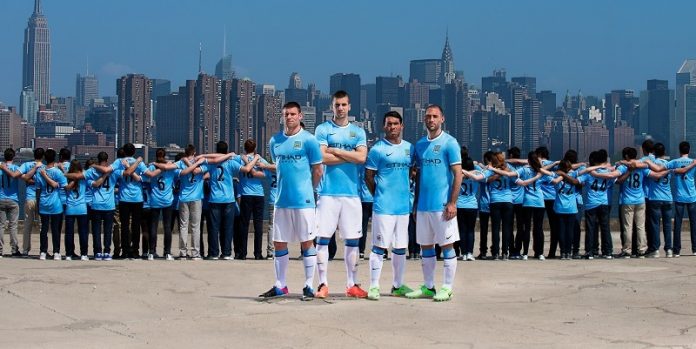 The one-week tour of New York was kicked-off in style by revealing the new 2013-14 Manchester City home kit by Nike in the heart of the Big Apple.

The kit pays homage to City’s heritage while reflecting the club’s modern style. The shirt is a classic design – quite similar to Nike’s England home shirt – featuring a sky blue body with a white ribbed crewneck and cuffs. The collar and cuffs also feature a dark blue trim to represent the colour that City wore as part of their first-ever kits in 1892.

The club crest is placed inside a shield shape on the 2013-14 Manchester City home shirt; inspired by the city of Manchester’s coat of arms. It is notable here that City used Manchester’s coat of arms as their own crest in the 1956 FA Cup final. Inside the neck is a bonded woven label featuring “Pride in Battle”, the translation of the Latin phrase “Superbia in Proelio“.

Manchester City fans from St. Louis and New York will be able to see the debut of the kit when City step out at the Busch Stadium and the Yankee Stadium to play another ‘Blue’ Premier League team – Chelsea.

“We are delighted to join forces with Nike. Having them as our new technical kit partner demonstrates City’s growing global appeal.

“Nike’s extensive distribution networks will ensure the club’s presenece in market stretching from Africa, Europe, Asia and the Americas.

“This is our third visit to the USA in the last three years, and we enjoy a fantastic following here. It’s an exciting time for soccer in the States and we are big believer in its future.”

Manchester City made headlines both in England and the USA when the club’s fixture in St. Louis’s Busch Stadium set a new football record in America by selling out in less than twenty minutes. This could be translated into a strong fanbase for City’s joint project with NY Yankees of the upcoming New York City FC.

The new 2013-14 Manchester City home kit is now available to pre-order from www.mcfc.co.uk/shop.