Update: While the world pretends that it cares about the FA Cup final, we have a bit more class. Good luck Pompey, and good luck Cardiff – if it weren’t for Ramsey I doubt any neutrals sitting outside the UK would be watching (and even then I doubt they would – they don’t even know about Ramsey!). I find this spandex material that can make me faster (and help me recover quicker from any type of exertion … hmmmm) far more interesting.

The FA Cup final (remember, the one that no one’s interested in?) just got a lot more interesting – Cardiff City have a secret weapon up their sleeves and on their legs that will help them be faster, stronger and fitter than their Premier League opponents Portsmouth FC.

The team will be wearing high-tech Australian compression clothing called ‘Skins’ to squeeze an extra yard or two on the Pompey players.

The tops and half-tights will be worn underneath Cardiff’s playing kit and are, as their name implies, skin tight. They’re designed to compress muscle groups to trigger an acceleration in blood flow which means the Cardiff boys will be getting increased oxygen to their working muscles – resulting in an enhanced performance on the day.

Gerry can do the skin-tight jokes I’m sure, but the key question is – does this ‘Skins’ stuff do as it says on the label? Will it make them faster? Stronger? Fitter?

The gentleman who alerted me to this story (working for ‘Skins’, of course) also obliged my request for some research conducted in this field. From the reports I’ve just read through, ‘compression clothing’ claims to increase lactate removal, reduce the time it takes for the heart beat to return to a normal level, reduces fatigue and allows athletes to exert themselves for longer (whether it’s strength or aerobics that you’re testing).

The tests they’ve carried out (at least from what I’ve seen) show a slight, but not significant, improvement in performance while wearing compression clothing. Every little bit matters, so even a slight advantage could, over a long period of time (say 90 minutes), give a team the upper hand? If Cardiff players were fresher around the 80th minute with the scores tied 1-1, they’d have the energy to put Pompey under pressure and maybe grab that late goal, right?

In theory, or that’s what Skins have implied with saying it out loud. I have only one criticism to make on the testing, and it’s that they’ve failed to eliminate (as far as I can see) the psychological impact among test-takers of wearing ‘Skins’. An athlete’s mental state has a significant impact on his physical performances, especially his aerobic and strength levels. Just as depression can cause us to become lazy and slow, a ‘positive, confident state of mind’ can help us be stronger and faster than usual, and recover quicker than normal from any exertion.

I would imagine that the test takers would have known that the Skins could help their performances and boost their test results – could it be that the Skins had a placebo effect as opposed to any real impact?

In the context of the 2008 FA Cup final, it really doesn’t matter whether it’s in their head or whether the advantage is real. Either way, wearing skin-tight shorts could give Cardiff City the little extra push they need to topple Portsmouth and win the FA Cup (and get into Europe). 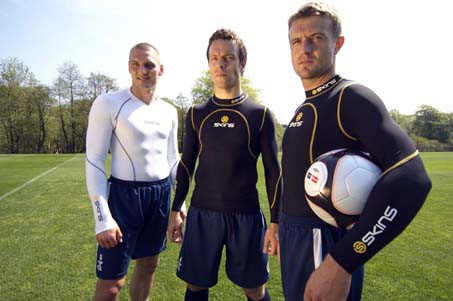 Update: Portsmouth have had something similar all season with their ‘ionized shirts’. Come to think of it, we’ve seen several players wear skin tight shirts underneath their kit during matches as well, so perhaps it’s more common (and therefore more likely to be scientifically significant) than we thought earlier.