This summer (much like every summer before it) football sees a mad dash for the good and not-so-good footballers around the world which is reported on/fueled by the can-do-no-wrong-with-free-speech press and their always-telling-the-truth journalists.

It can turn ugly, especially with players’ heads being turned by the thoughts of more money, greater glory and managers doing their best to hold on to players. This summer we’ve seen managers use a variety of techniques to convince their players to stay, and we thought it would be a fun idea to make a list of current and old methods.

Without further ado, the top 10 strategies managers have used to keep their players from leaving during transfer season:

From threatening to let him ‘rot in the reserves for four years’ to suggesting he move his family to Manchester in an attempt to call the ‘I want to be closer to family’ bluff, Manchester United did everything possible to keep their hands on Cristiano Ronaldo. They even went to FIFA to complain about Madrid, which is ridiculous if you consider that FIFA loves Madrid and that Calderon is too smart with his comments to be caught in any way.

If you have a player on a long-term contract, I guess the best thing to do is to tell him to shut up and report for training….

9. Liverpool: Let’s Give Him More Money

When Steven Gerrard wanted to leave Liverpool for two consecutive summers, the club did what any jealous, not-so-pretty girlfriend would do when her guy wants to trade her in for a hotter model – they laid down and invited Gerrard to walk all over them.

Is it foolish to think that Steven Gerrard would have won a league title by now if he’d moved to Chelsea a few summers ago?

8. Lyon/Sevilla: We Want Your Stadium In Exchange

Lyon and Sevilla have a different strategy – when a team comes calling, they do some creative maths and somehow end up overpricing the player by 3x. Usually that scares teams off, as Chelsea broke off negotiations for Daniel Alves last summer (for all their billions, a few extra million could have given them the Champions League, who knows?). When it doesn’t work, they rake in ridiculous amounts of money.

7. Aston Villa: We Have Players To Buy

Martin O’Neill’s idea of imposing a ‘deadline’ on Barry’s move was in theory a very good idea – get Liverpool to pay or get on with next season’s preparations. Unfortunately, Villa had already bought Sidwell for midfield and are funding new purchases (Young, Shorey) in the expectation that selling Barry will pay for all that.

I guess if you need the money, principles come second….

6. Chelsea: We’ll Keep Him Till His Contract Runs Out

It’s not enough that they’ve gotten the best years out of the player, they now want to keep him for another year in protest of his ‘desire’ to leave. I sympathise with Chelsea on this one – they may not have handled Lampard right but who lets their vice-captain and club icon walk out on a transfer when you don’t need the money anyway?

And that’s exactly what they did after Owen Hargreaves dared to speak to the press about his dream to play for Manchester United. Hargo’s free now but for a while it seemed like Bayern would do what Chelsea are doing with Lampard, only for 3-4 years.

And when they sold the player? They said the upside was that they wouldn’t need to pay his wages….

4. Barcelona: We Want Them To Go

One of the best transfer strategies I’ve seen is Barca’s ‘we want them to leave’ ploy. They knew there would be speculation around the futures of Ronaldinho, Eto’o and Deco with bids coming in from left and right, so they did the smartest possible thing – they put each player up for sale, with a reasonable price-tag, and told the football world to pay or keep moving.

You’d think that the most notable thing to happen last month at White Hart Lane was Tottenham reporting United and Liverpool to the Premier League for tapping up their strikers. Nope, that’s far from it. Not only did they turn around where Keane was concerned when the words ‘insane profits’ were whispered but they cheerfully dropped all charges when offered a donation by Liverpool to their charity.

As a matter of public record, Soccerlens now accepts donations….

Far more ingenious than it looks. First they wait as long as possible till the clubs chasing their players have bought other players and are now low on cash. Then they reduce the asking price to what the previous offer was, knowing full well that even if the suitor can pay the price they’ll have to cut down the wage bill, which would turn the player off as he wanted higher wages in the first place.

Love ’em or hate ’em, Madrid have a knack for being #1 on many lists. Most Champions League Titles, Most Popular Club, Most Valuable Club (though United have their number on that one), Most Popular Player Destination, and now, Best Transfer Strategy.

Imagine this – for a month, your star forward’s agent has been going on and on to the press about how his client wants to leave. Then, the day after the agent quotes the player as saying that he’s anxious to leave for Chelsea, Calderon tells the press that “no, he want’s to stay.”

I didn’t know denial worked as a transfer strategy but if Calderon can live in denial for the next 3 weeks he’ll get to keep Robinho for another season. 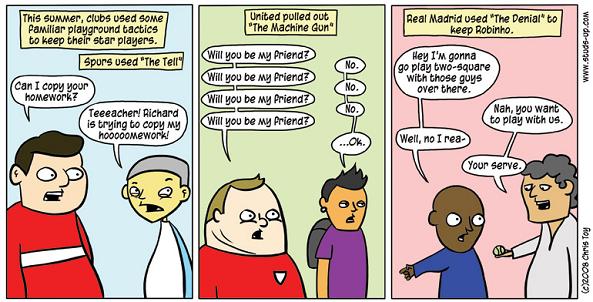 Comic by Chris Toy – Studs Up

So there you have it – the top 10 ways clubs deal with wantaway players. I’m sure you guys have more, so let us know in the comments.