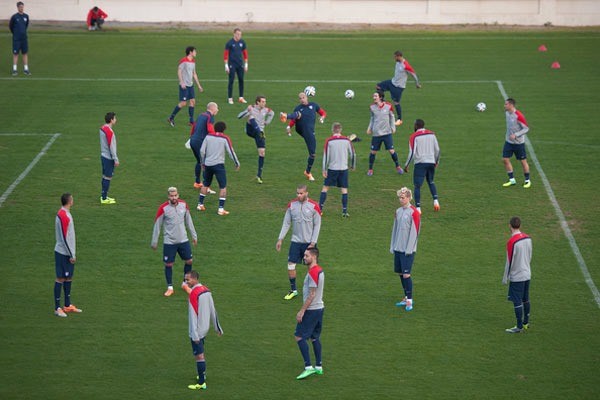 The senior and youth national team will be calling Kansas City a new home in a couple of years. Photo provided by US National Soccer Players.

Kansas City is on the verge of becoming the capitol of soccer in the United States.

“The biggest thing that we have to do is have it open for the Copa America in 2016,” Sporting Kansas City CEO Robb Heineman told Soccer By Ives. “We’d love to be a major training site for teams in 2016 — not only the U.S., but I think we’d like to talk to Brazil and Argentina and Chile and some of those (teams) and have them in residence. That will probably mean that we will start moving dirt this fall.”

A group of men introduced the news to the press, the group included: Heineman, United Government of Wyandotte County and representatives from Schlitterbahn Water Park and EPR Properties Wednesday and Kansas Gov. Sam Brownback announced together of the new training center, that will cost over $75,000,000.

“From a sports science perspective, we want this to be the most advanced facility in the United States,” Heineman told Soccer By Ives. “We don’t necessarily have the acquirement to do that today so we’re going to have to do that through partners. That’s what we’re working in earnest now is making sure we do have the best partners to make this a success with the facility that we want.”

The future training center will be located at  Parallel Parkway and 98th Street in Kansas City, KS. This training center is projected to bring in around $1,000,000,000 to the city for the next 30 years. This will become the second U.S. training center, the first one is in Carson, CA and the President of US Soccer Sunil Gulati is extremely excited to see this project come to life.

“Player and coaching development is a main focus for U.S. Soccer, and we are pleased that Sporting Club is pursuing a world-class training facility to help the sport continue to grow and advance,” Gulati told Soccer By Ives. “We are looking forward to working with Sporting Club on the next steps towards the creation of the National Training and Coaching Development Center and anticipate it hosting our National Teams and coaching education programming in the future.”