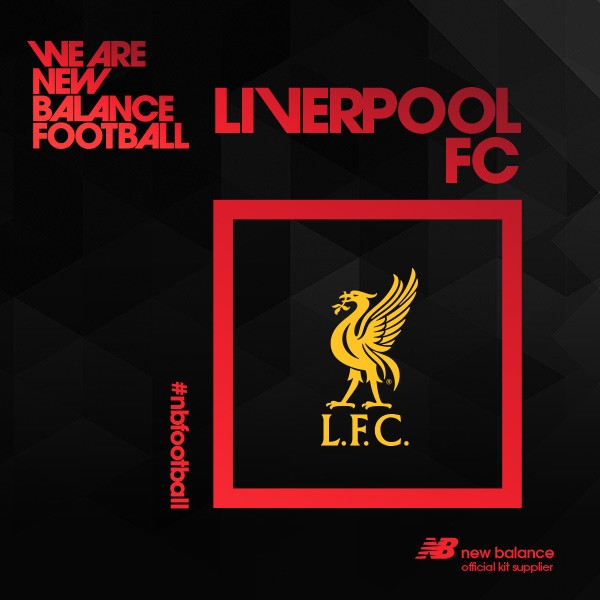 The agreement will see New Balance work alongside LFC to deliver world class product on pitch in line with the club’s ambitions to perform at the highest levels of the game. New Balance will be responsible for designing the club’s kits, along with all training apparel. As part of the deal LFC product will be sold through New Balance retail stores globally and will drive New Balance’s growth and entry into the football market.

“We are thrilled to announce this sponsorship of one of the world’s leading sportswear brands, which is a record-breaking deal for the Club”, commented Billy Hogan, Chief Commercial Officer at Liverpool FC.

“Like Liverpool FC, New Balance has over 100 years of heritage and a global footprint. Not only are they well known for their technical innovation across a range of sports but they also have a presence in many countries across the world, which will all feature LFC kit. We are very excited about joining forces with them”, he added.

Richard Wright, General Manager of New Balance Football said: “Liverpool FC is one of the most successful and decorated clubs in world football and we’re delighted to partner with the club. The sponsorship represents an important step for New Balance launching into football and reflects the global growth ambitions of the brand. Over the course of the contract New Balance will bring innovation and world class product to Liverpool FC and its global fan base.”

New Balance’s sponsorship with Liverpool FC continues the strong and ongoing relationship with Fenway Sports Group (FSG). The sportswear manufacturer also has a long-standing relationship with the Boston Red Sox and has previously been involved with Roush Fenway, both owned by FSG.

Liverpool Football Club announced its first ever official club kit supplier agreement with Warrior, a brand owned by New Balance, when the club released the LFC home, away and 3rd kit in 2012. The tremendous success of this initiative led New Balance to decide to launch in the global football market in 2015. Warrior continues to deliver innovative products in performance sports including lacrosse and ice hockey.

As a result of this deal, the club will switch to current brand Warrior’s parent company from next season. The Reds signed a six years deal with Warrior in 2012 worth £25m a season that would make the whole package worth around £300m.