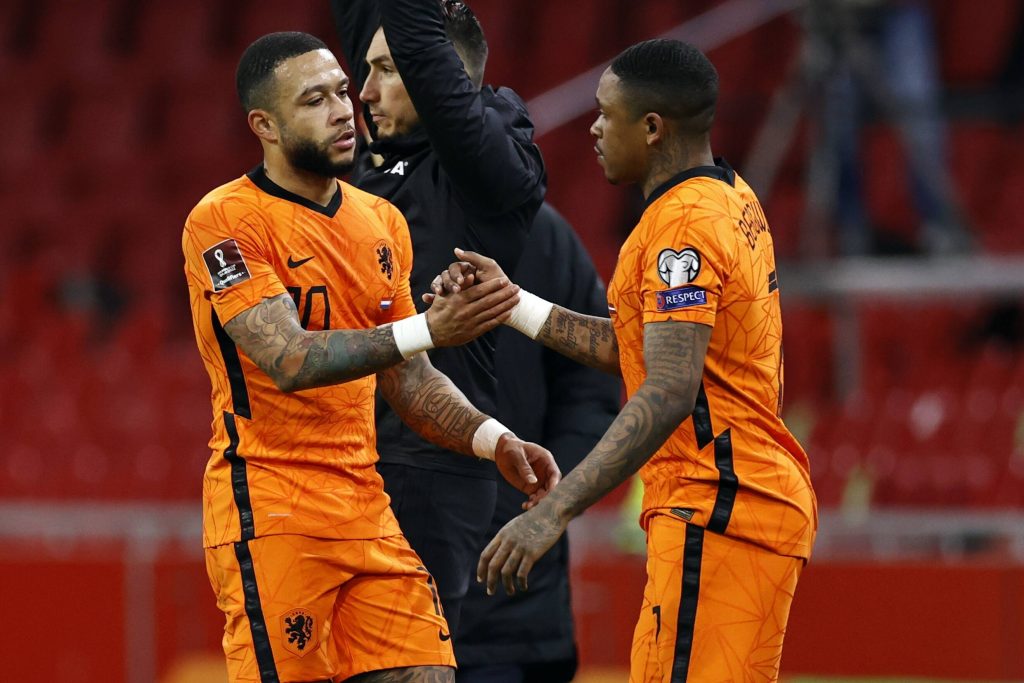 The Netherlands’ European Championship squad was announced on May 26, with the omission of Tottenham Hotspur forward Steven Bergwijin raising a few eyebrows.

Frank de Boer has finalised his 26-man squad for the highly anticipated Euro finals, with Berwgijn one of the most notable absentees.

A lack of regular first-team football in north London down the final stretch of 2020/21 saw the 23-year-old winger surrender his place to the uncapped Cody Gakpo from PSV Eindhoven.

The 29-year-old picked up a horrific knee injury in the Merseyside derby against Everton in October 2020 and has yet to regain his full fitness.

Nathan Ake has experienced an injury-riddled season at Manchester City but has still made the final cut.

However, given his limited playing time at the Etihad Stadium, the former Bournemouth man is likely to play second fiddle to Juventus’ Matthijs de Ligt and Ajax’s Daley Blind.

De Boer prefers a four-man backline, which means Inter Milan’s Stefan de Vrij and Brighton’s Joel Veltman will also compete with Ake for a place in the starting line-up.

Donny van de Beek has made the Netherlands’ Euro 2020 squad despite failing to impress during his maiden season at Manchester United.

The Red Devils misfit will reunite with his former Ajax buddy Frenkie de Jong, who has established himself as a permanent fixture in Ronald Koeman’s Barcelona squad.

The 23-year-old midfielder has been one of the Eredivisie headline performers this season, racking up 15 goals and five assists despite playing in front of the defence.

Koopmeiners’ eye-catching displays for AZ have attracted attention from a host of top clubs, and the upcoming tournament could be his chance to land a lucrative contract in Europe’s top-five leagues.

Memphis Depay will headline the attack alongside the in-demand PSV forward Donyell Malen, who has already drawn interest from several Premier League sides, including Liverpool.

Wolfsburg target-man Wout Weghorst will make his international debut at the major tournament on the back of an outstanding Bundesliga season.

The robust striker has netted 20 goals in 34 league matches for Die Wolfe to force his way into the Netherlands squad for the first time since November 2019.

Weghorst will have to fight Sevilla’s Luuk de Jong for a place in de Boer’s starting XI.

Memphis Depay is the main star of this Netherlands team and arguably their most prolific player.

With his contract at Lyon running out in the summer, there are plenty of clubs interested in acquiring his services, including AC Milan and Barcelona.

Led by Ronald Koeman, the Catalans were the front-runners in the race for the 27-year-old’s signature.

However, the Dutchman’s future at Camp Nou is hanging by a thread, which threatens to compromise Barca’s pursuit of Depay.

So the former Manchester United flop will have the opportunity to convince Joan Laporta to take him to Spain regardless of Koeman’s fate.

Depay heads into the Euros on the back of another remarkable season at the Groupama Stadium.

He has tallied 22 goals and 12 assists in all competitions to finish the season as Lyon’s most productive player.

Equally prolific on the international stage, Depay has either scored or assisted in each of his last five starts for the Netherlands.

After failing to qualify for back-to-back major tournaments, the Netherlands have a point to prove at the rescheduled Euro 2020.

Paired with Ukraine, Austria and North Macedonia in Group C, the Oranje are the favourites to progress to the knock-outs.

De Boer has an exciting mix of experienced players and rising stars at his disposal, though Van Dijk’s absence remains a massive upset.

However, the Netherlands’ recent showings in various competitions indicate they are clawing their way back into Europe’s elite.

Although they are not among the top-five favourites to lift the trophy ahead of the tournament, the 1988 European champions could be one of the most intriguing stories of the summer.