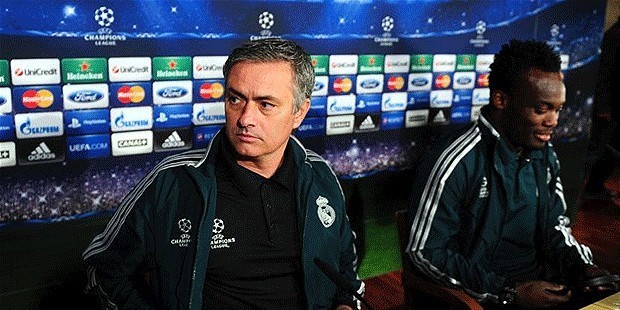 Pre-match press conferences have been one of Jose Mourinho’s favourite playing grounds. But for the biggest match of the this season’s Champions League so far, Mou seemed stiff or, dare I say, nervous may be.

Real Madrid face Manchester United in the Round of 16 of the 2012/13 Champions League – a game that is on the mind of every football fan in the world. Most, who know of Mourinho’s antics, expected him to be a little more… you know… Mourinho-like at the press conference. That didn’t happen.

It was hard to believe that he is the same Jose Mourinho who was so confident with his Chelsea team that he announced his starting XI before a Champions League match against Barcelona.

The self-proclaimed ‘Special One’ has said himself the matches can be won before the teams even step foot on the field. With all the commotion going on about his Madrid team, may be Mourinho has conceded the match in the pre-match press conference already.

Michael Essien did try to lighten the mood but he could only put a smirk on his Jose’s face. The press was so taken aback that one of the journalist asked if he is still happy with his profession. He said more than once during this press conference that he was looking forward to being back in English football.

Mou still managed to showcase his exceptional command over the press as he dodged past questions like they were traps. When asked by English journalists about the troubles he is facing in the dressing room, he replied by asking them to go out with their Spanish counterparts and said:

“Speak to the guys who write all the stories.”

Another interesting reply came from him when one of the journalist asked if his players were behind him. Mourinho couldn’t resist being Mourinho, he said:

“I am on the bench… they are on the pitch, so they are in front of me, not behind me.”

You have to hand it to him. It is a witty reply but is there a ‘no’ hidden in there somewhere? Without reading too much into it, it seems he just sidestepped the question.

In stark contrast, when Alex Ferguson came to the press conference, he seemed much more relaxed and even looking forward to the game. He started off with a joke about catching up with Real Madrid’s nine European Cups and left the press conference with a smile on his face.

At one point, he squinted to make out who was asking a question and when he finally spotted a familiar face, he said with a smile:

If anything, Ferguson should be worried about this game more than Mourinho. Out of the fourteen times their teams have met, SAF has only won thrice – one of those wins was on penalties.

Whatever the historical stats say about the two managers, it is going to be a game that will not end goalless – a notion that was shared by Ferguson:

The game that was touted as an “acid test” by Ferguson can be full of surprises. Both managers are known for using varying and sometimes unusual tactics to overcome their opposition. Robin van Persie revealed how the first team coach, Rene Meulensteen, has used unique training sessions for different occasions. 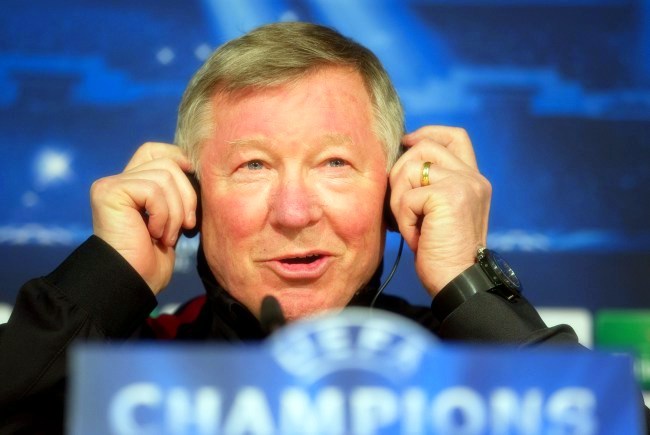 Two things that are utterly important for Manchester United are nullifying Cristiano Ronaldo and getting at least one away goal from the Santiago Bernabeu. Since Paul Scholes has been left behind in Manchester with a knee injury, Ferguson could deploy Phil Jones for a spoiling job on Cristiano.

Both, Mou and SAF, were not willing to talk about their tactics for the game but Ferguson did reveal that Shinji Kagawa would be involved at some point. Jose Mourinho, however, made remarks about the frequency with which Madrid’s press reveals his teams and tactics against his wishes.

From the press conference, we can assume that either Mourinho is up to something more clever than Europe has yet seen from him or he is actually worried about losing out on the chance of winning Champions League gold with Real Madrid.

Here is a quick peek into the press conference: