Sportslens.com
Home Competitions MLS “The MLS Messi” – But will he be lining up for the... 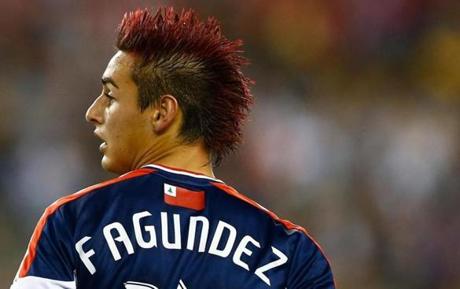 Being labeled the “new Messi“, has over the last few years become so commonplace that it has almost become somewhat of a footballing cliche. That considered it has to even my own amazement, crossed my mind that if by labeling Diego Fagundez (19th of February 1995 – Montevideo, Uruguay) the “MLS Messi” if I am not in fact paradoxically doing him a disservice, such is the range & depth of his current & future talent.

Fagundez like Messi, made his professional debut at the tender age of 16, a precocious talent who like the Argentinian superstar, was already well known at a national level from an early age.

Likewise both Messi & Fagundez progressed through the Barcelona & New England Revolution youth set-ups respectively after emigrating from their homeland in search of footballing prosperity.

Born in Uruguay, Fagundez’s father was also a professional footballer, though the two performed at opposite ends of the spectrum. Fagundez senior, a goalkeeper, was tasked with stopping goals. His protege the young Diego, is regularly at the heart of both creating & scoring goals.

Since bursting on to the Major League Soccer scene back in 2011, Diego Fagundez has continued to consistently develop his already considerable footballing ability. Unlike other young soccer superstars in the US in particular, Fagundez’s career has not fallen waywardly from its glittering path.

The teenager who was raised since the age of 4 in Boston, has maintained a humility & down to earth attitude as well as a strong community presence, that is not all together common amongst the modern era young sports stars, this perhaps being also key to his future success also.

A talented playmaker, comfortable playing just off the forward, or in the wide areas across the forward line of 3 in the in-vogue 4-3-3 formation. His vision, technique and intelligence suggest that Fagundez like Barcelona’s Argentine superstar could well end up evolving into a “False 9”, this perhaps a position that could further showcase his immense abilities.

At the age of 19 Diego Fagundez has already amassed a considerably wealth of experience at club level for one so young. Incredibly though, he has yet to represent either his native Uruguay or his adopted nation of the US at the full international level. Though the latter in fairness can be attributed to his current lack of eligibility, not yet obtaining his necessary pre-requisite of American citizenship.

It would be however unthinkable that this remain the case for much longer. Equally it would seem inconceivable that a nation like Uruguay even with a plethora of stars such as Luis Suarez, Edinson Cavani or the evergreen Diego Forlan, would let a talent as extraordinary as Diego Fagundez slip through their net & go on to represent the “stars & stripes“, but should they do so they may well be aiding the American’s in considerably reducing the footballing gap between the two nations, and give Jurgen Klinsman‘s men more than a fighting shot of exceeding this tournaments notable achievements.

3 years into what I have no doubt will be a glittering career, Diego Fagundez’s story is barely into the prologue of what can go on to be an encyclopedia of his footballing chronicles. But if as expected, he continues along the same vein as his fellow South American alter-ego. Then we can certainly look forward with bated breath to enjoying the “European chapter’s” of the Diego Fagundez story.