AC Milan have not only lost their status of being one of power houses in Europe now, but are a fading force in Italy as well. This summer, however, they did some smart signings. Although, the Rossoneri couldn’t attract big money names like Juventus or Roma; they rather focused on getting smart deals done through loan and free transfers.

A major chunk of their transfer money came from the sale of Mario Balotelli who joined Liverpool. Giacomo Bonaventura is their top signing, signed from Atalanta for €7m. Diego Lopez joined on free from Real Madrid while Jeremy Menez and Alex joined on free transfer as well from PSG. Chelsea duo Marco van Ginkel and Fernando Torres have been signed on a season long loan. 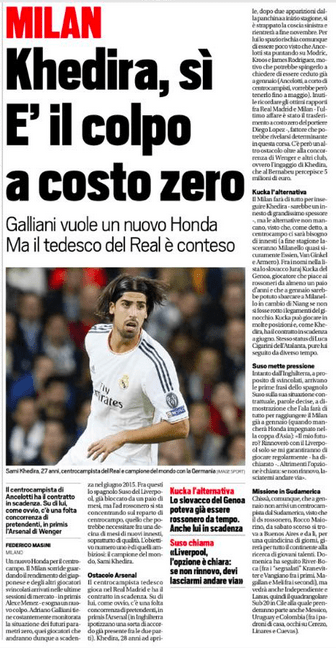 The model seems profitable to them at the moment, as Milan are currently not in a position financially to do spend recklessly. Milan have started their season well and are currently lying fifth in the table. Filippo Inzaghi has done well so far and depending where Milan finish in the end, he will be looking to add quality players to the ranks.

According to reports from Tuttosport, Milan are looking to sign a creative midfielder and has targeted Sami Khedira for that role.

Khedira is a long term target of Arsenal (also linked with United and Chelsea this summer) and has been heavily linked with the Gunners this summer as well. The German international will be a free agent at the end of the season, and Milan CEO Adriano Galliani will be looking to pounce on that opportunity at the earliest. Khedira has dropped down the pecking orders at the club and has only made two sub appearances for Madrid this season.

Milan are also linked with Liverpool’s attacking midfielder Suso. The young Spaniard recently claimed that he could leave the club, should he doesn’t get regular opportunities.

Arsenal who are in need of a strong defensive midfielder in the summer could try their luck for Khedira next summer.