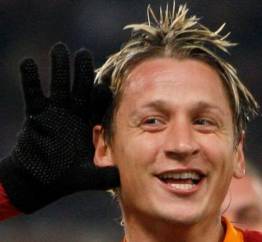 Phillipes Mexes counts AS Roma among his former clubs.

Philippe Mexes will serve a four-match ban after punching Juventus defender Giorgio Chiellini during AC Milan’s 3-2 Serie A defeat in Turin on Sunday.

Former France international Mexes, 31, was sent off for two unrelated bookings in this meeting of Italian heavyweights.

The referee missed the punch, but retrospective action has been taken by the FIGC, the Italian football federation.

Mexes thus serves a suspension for violent conduct on top of the one-game ban he picked up. He will miss matches against Udinese, Parma, Lazio and Fiorentina.

Reigning Serie A champions Juve came from behind to beat the Rossoneri with goals from Andrea Pirlo, Sebastian Giovinco and Chiellini.

Match winner Chiellini described his altercation with Mexes as “just not football”.

Victory for Antonio Conte’s Old Lady leaves them third in the league, level on points with Napoli and two behind early leaders Roma.

Sulley Muntari, once of Portsmouth and Sunderland, scored both goals for Max Allegri’s depleted Milan. They sit in 12th place.

Mexes has now been sent off seven times in his nine-year Serie A career.