Actions speak louder than words. It looks like Mauro Icardi’s agent knows this better than anyone else in World Football. The Argentine striker who was involved in an altercation with Nerazzurro Ultras after defeat to Sassuolo last week said that his agent advised him against celebrating either of his two goals against Palermo in the weekend.

Football Italia have quoted Icadri saying, “Against Palermo I didn’t celebrate because I had made that decision with my agent. Scoring is what fuels the team, I want to help Inter to get as high up the table as possible.”

Icardi’s future at Inter has been under speculations over the past weeks and the €35m rated striker has been linked with Chelsea who are in pole position to sign him in the summer. Reputed journalist Tancredo Palermi had in fact stated that the Blues had a meeting with Icardi’s agent while Manchester United were also scouting the player. 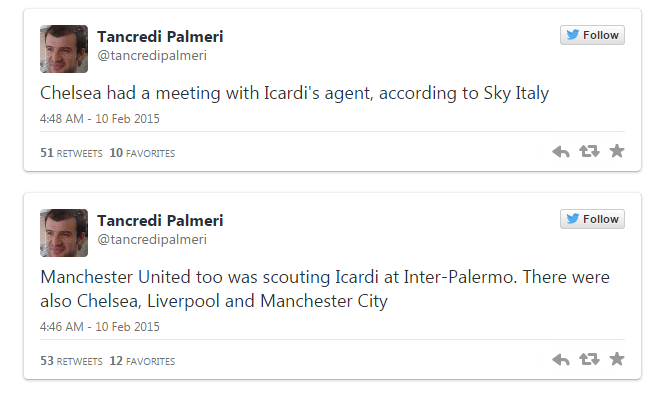 Inside Futbol though have quoted the club’s sporting director Piero Ausilio that Inter want to keep the striker. Ausilio told Sportitalia., “Mauro is a very calm, level-headed lad who’s completely devoted to his family. He works tirelessly during the week and scores goals on a Sunday.”

Gianluca Di Marzio staff David Amoyal also states that Inter want to negotiate a new contract for Icardi. Amoyal states that player earns a net €1m per season and Inter have offered €2.8m a season, but they are still discussing the image rights.

Inter though have changed the image rights as they want to control the revenues. However they are willing to make an exception and leave Icardi with the rest 50%. The San Siro club is well aware of the interest from the Premier League giants which also include Liverpool.