Sportslens.com
Home Columns Football Interviews Materazzi reveals what he said to Zidane to cause the infamous headbutt... 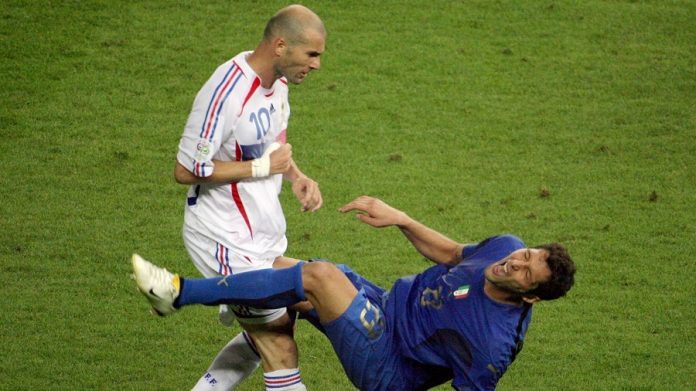 Former Italian defender Marco Materazzi has undisclosed what he said to his opponent Zidedine Zindane which caused the infamous headbutt incident in the 2006 World Cup final.

In the 110th minute of the mega International finale, France midfielder Zidane produced one of the most controversial moments in the history of the game as he was sent off for headbutting Materazzi after the duo confronted each other during a heated encounter.

A decade on, few details of the incident still remain unclear but the former Inter Milan defender has now clarified to what he said to the current Real Madrid head coach which provoked him to an extreme measure.

“What I said was stupid. But it didn’t deserve that reaction,” Materazzi said in an interview with French newspaper L’Equipe.

“You would hear stronger words said on the streets of Naples, or Milan, or Paris, much more serious things.”

The most common version remains that Materazzi insulted Zidane’s mother but the Italian denies that was the case.

“My mother died when I was 15, I would never have insulted his. I spoke about his sister,” Materazzi added.

The World Cup final went on to penalty shootout as 10-man France lost 5-3 to Italy and Materazzi insists he does not regret that the incident overshadowed the blockbuster final as well as his excellent performance in which he scored Italy’s equalizer before converting from the spot in the resulting shootout.

“It doesn’t mater, I don’t hold any grudges and never will,” concluded Materazzi as he claimed the only major International trophy of his playing career that night.