Reputed Italian journalist and Gianluca Di Marzio staff David Amoyal has taken to Twitter citing Monaco owner Vadim Vasilyev that the latter is yet to hear from Manchester United on the future of Colombian striker Radamel Falcao.

The Red Devils who had paid the French side £6m for the striker’s services for a one year loan will need to pay £44m if they are to sign Falcao on a permanent deal in the coming summer. Going by the past few weeks, it is unlikely that United will pay the hefty fee for El Tigre who has disappointed this season.

Falcao has just scored 6 goals and grabbed 4 assists in 19 appearances this season and his performances have been way below par to say the least. 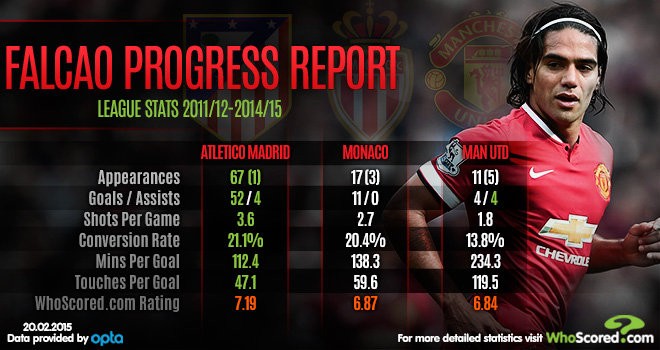 Louis Van Gaal had earlier said that he won’t judge a striker by only the goals scored but United will be better advised if they splash the cash on a player who is relatively young and can take the Premier League by surprise.

Falcao is already 29 and spending a net £50m for his services might be a huge blunder. A move for Paulo Dybala, Jackson Martinez or Edinson Cavani would be a much better option for the Old Trafford side.