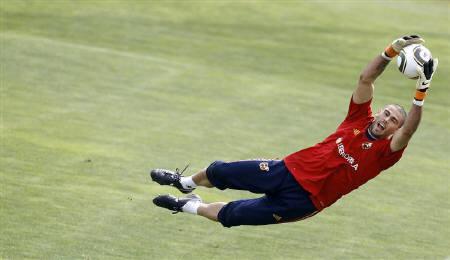 Former Barcelona goalkeeper Victor Valdes has been training with Manchester United for quite some time now. And according to reports from Spanish Media outlet MARCA, the Spanish goalkeeper is eager to sign for the Red Devils as quickly as possible in the upcoming January transfer window.

As Valdes is a free agent, United would have no complications to sign the Spaniard who has now recuperated from the injury he suffered while playing for Barcelona last season. The report claims that French side Monaco were also interested in the player but they moved out.

Valdes was promised an extraordinary salary of €10m per season with additional bonus and its only safe to say that the shot stopper would be very lucky to get something very close to that if United sign him. It is believed that Valdes has settled a contractual dispute with Monaco but the French side might still need to pay a compensation to the player.

United could also sell want-away goalkeeper Anders Lindegaard who has made it clear that he wants to leave the Red Devils. Lindegaard is contracted with United till 2016 but wants to move elsewhere where he would get significant game time.