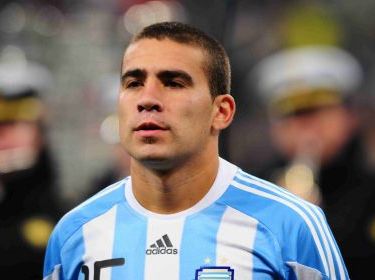 Louis Van Gaal’s strengthening of the Manchester United seems to be going according to plan. After signing Memphis Depay from PSV Eindhoven to bolster his attacking options, it now looks like the Dutchman is close to bringing in an accomplished defender as well. According to Argentine newspaper Ole, Valencia’s Nicolas Otamendi has signed a preliminary contract to play for United next season.

Even though a formal agreement between the clubs is left, the report states that the player has agreed to the move. It was revealed earlier in the week that the Argentinean dreamt of playing in the Premier League, and reputed Spanish journalist Guillem Balague tweeted about how he was an Old Trafford target.

On Otamendi. Sources close to the player say his dream is to go to the PL and United will continue trying to get him. Valencia pesimistic

Otamendi will head off to the Copa America following his club’s last league game next week, and United will want to seal the deal before then. Doing the business early will only do good in the long run, as Jose Mourinho and Chelsea proved last summer.

United need to sign a defender this summer, and after Mats Hummels looks set to snub a move to England, as stated here by ESPN, they have turned to Otamendi. According to the Daily Mail, the Valencia man is rated at around £36 million.

The Red Devils have had big problems at the back this season, after they saw Van Gaal’s tactic to play a 3-5-2 formation at the start of the season backfire miserably. This led to a change midway through the campaign, and even though they have improved, bringing in some more experience at the back is important. Chris Smalling and Phil Jones have been decent, but conceding 37 goals (this year’s tally) is certainly not something the manager will want to repeat next year.

Otamendi was dropped from his national side for the 2014 World Cup in Brazil, but has been impressive for Valencia this season. Along with being solid as a defender, he has been very effective as an attacking threat too, scoring 5 goals. The former Porto man has plenty of experience at the highest level and will bring a lot to the table at United.