Memphis Depay is one of the hottest properties in Europe at the moment, and Liverpool and Manchester United are said to be hot on the winger’s heels this summer. The Dutchman has been in sparkling form with PSV Eindhoven this season, scoring 20 league goals and helping his side seal the Eridivisie title.

Carl Thomas is an agent with the SEG Group, who represent Depay. Amidst all this talk of a move to United, Thomas today tweeted a photograph outside the Red Devils’ Carrington training ground in Manchester.

This fuels further speculation of a possible transfer, as Louis Van Gaal looks to kick on from a promising season and challenge for trophies next year. The Dutchman, who led his national side to the semi-finals of the 2014 World Cup, knows Depay’s quality very well. The 21 year-old may not have been a regular starter for the Netherlands, but he scored two goals, including the winner in a thrilling 3-2 victory over Australia in the group stages. 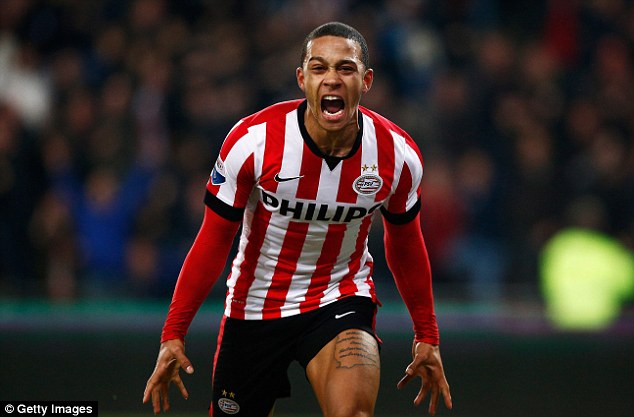 In his press conference before Sunday’s game against Everton though, Van Gaal refused to give anything away regarding the move for Depay, but stated that the club’s ambitions were certainly larger next season.

“I don’t discuss it with the media and you know my answer,” he said. I have a lot of relationship with players so I cannot buy all the players I have coached already.”

According to The Telegraph, Depay would cost United something in the range of £25 million, and would demand wages of £130,000 per week.