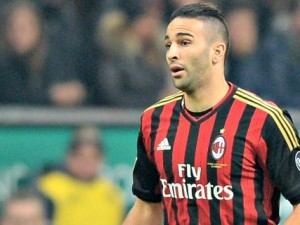 Manchester United’s bid to find a solid and reliable centre-back in January has received a boost after it has emerged that AC Milan defender Adil Rami may be looking at a move away from the San Siro. French magazine Le 10 Sport reports that the Frenchman is frustrated at the lack of game time he is currently getting and could be open to a transfer. The story was first reported by Italian website Tutto Mercota Web.

The former Valencia man was offered to Monaco in the summer by Milan, but refused a move. Since then, he has seen the likes of Philippe Mexes, Christian Zapata and Alex get the nod over him in the side. Rami has made just 4 Serie A appearances this season for the Rossoneri.

United manager Louis Van Gaal is looking to shore up his side’s defence, which is currently facing abject injury problems. The likes of Michael Carrick and Antonio Valencia have had to make up the backline in recent games, after several first-teamers were ruled out.

They are though, set to face competition from fierce rivals City, in their pursuit of Rami. Manuel Pellegrini also has problems at the heart of his defence. Captain Vincent Kompany is solid as a rock and reliable enough, but the Chilean manager has struggled to find him the right partner. Martin Demichelis has several weaknesses that can be exploited, while Eliaquim Mangala has had a mixed start to his City career since moving in the summer.