Manchester United are set to rekindle their interest in Argentine fmidfielder Enzo Perez and are ready to hijack a deal from the grasp of Valencia, according to reports from Portugal.

The interest from Manchester United on Perez is nothing new. Surprised? Don’t be. Back in April, former Manchester United manager David Moyes took a scouting trip to Portugal to watch Benfica in action against Porto, in the semi-finals of the Taca de Portugal.

Few days later, Manchester United made contact with Benfica over the availability of the midfielder, where the Red Devils were told to pay €30m, which is his buy-out clause.

The interest of all a sudden had died down after David Moyes was sacked by United. Reports in Italy claimed that Juventus were plotting a move to sign him, while Valencia were emerging as favourites to lure the Argentine. 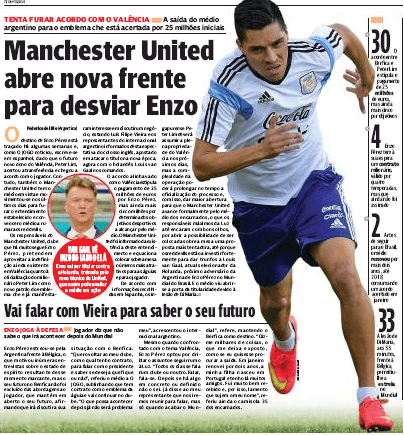 Benfica initially rejected a €25m offer from Valencia for the Argentine but the Spanish side, financially well equipped after the takeover by Singaporean business Peter Lim, were expected to meet the €30m release clause for the player.

However, O Jogo reports today that the delay in Peter Lim’s takeover has led Manchester United in making a shock move, with bid over €25m that Valencia would offer Benfica, as Perez is liked and appreciated by Louis van Gaal. The complexity at Lim’s takeover might give United the necessary time to act and hijack the deal.