Sportslens.com
Home Blogroll Manchester United must do everything to sign Paulo Dybala

Despite a mixed season so far, Louis Van Gaal’s men find themselves sitting comfortably in the fourth place just one point behind high flying Southampton. The Red Devils have somehow managed to grind out crucial points week in week out, under the former Holland manager and are firmly on course for Champions League football next season.

While expectations were understandably a lot higher following a remarkable spending spree in the summer, reality is Manchester United were never going to challenge for the title this season. After a disastrous campaign under David Moyes, the most important thing for the fallen giants was to get back amongst the elite and establish themselves as Champions League regulars.

Look at the season so far, there are several questions that can be raised about Manchester United and Louis Van Gaal, but one issue that sticks out like a sore thumb is their misfiring attack. Having signed the likes of Angel Di Maria and Radamel Falcao, United were expected to blitz most sides this season, something Liverpool did last season.

On paper the trio of Falcao, Van Persie and Wayne Rooney are perhaps bettered only by the Real Madrid trio of Benzema, Bale and Ronaldo. However, that hasn’t quite been the case on pitch. Former Atleti striker, Falcao seems to have lost his sharpness and confidence and despite recovering from his long term injury, the Colombian looks a shadow of his former self. Meanwhile, Robin Van Persie has had an inconsistent season so far. The former Arsenal captain has looked unplayable at times, but overall he has been extremely unreliable for the Old Trafford outfit. Perhaps misused, Wayne Rooney has been played all over the park and the England captain has had to suppress his goalscoring game for the sake of the team.

It is highly unlikely that United will take up the opportunity to sign Falcao on a permanent deal next summer, especially with the way the Colombian has performed so far. And let’s be honest, Van Persie is no spring chicken anymore. With Rooney and James Wilson providing little hope, it is imperative for Manchester United to go all out for a top quality forward in the summer.

One of the things missing from United’s front line, apart from the sharpness in front of goal, is a worrying lack of pace in their attack. While the likes of Falcao and Van Persie have never been pace demons, they are extremely intelligent players on their day. But with the duo slowly nearing the end of their peak, United will need to plan for future.

The Red Devils have been linked with several strikers over the last few months but one player they should categorically look to sign in the summer is Palermo’s Paulo Dybala. The Argentine forward is one of the hottest properties in Europe and is likely to make a big move this summer. While he is expected to cost around 40 million Euros, money is never an issue for a club of Manchester United’s stature.

The Argentine forward was snapped up by the Italian outfit from River Plate when he smashed 17 goals in his debut season with River Plate. However settling in was tough for Dybala as manager Gasperini was not convinced with the Argentine in his first season. However, following a series of impressive displays in the Serie B last season, Dybala has taken his game to the next level in the Serie A this season. Having scored 11 times already, Dybala is quickly turning heads around Europe. The Argentine has been likened with compatriot Sergio Aguero because of his close control, impressive acceleration and lethal finishing.

Despite being a lightweight, Dybala possesses superb energy levels and initiates Palermo’s pressing from the front. Also his incredible balance on the spin and agility makes him a tough player to mark out of the game. His acceleration and energy will not only revitalize United’s ageing frontline, but also sharpen up their presence in front of the goal.

Quite often this season, the likes of Falcao and Van Persie have been let down in front of the goal due to their poor touch (not that their superb first touch ability is in doubt), Dybala’s excellent first touch makes him a joy to play with, especially for intelligent and technical midfielders like Di Maria, Mata and Herrera. 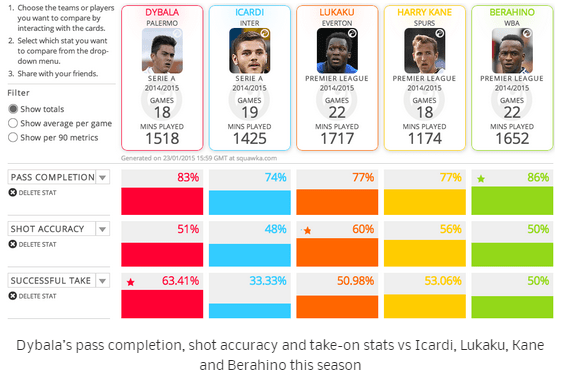 Dybala can also drop off and play in hole with his impressive passing skills. The Argentine is also a capable crosser of the ball (already has a few assists from crosses) and can slot in as a wide forward. Further, the young Argentine can play as a lone striker as well as a second striker and his ability to stretch defences with his pace, movement and intelligent runs make him a complete forward. 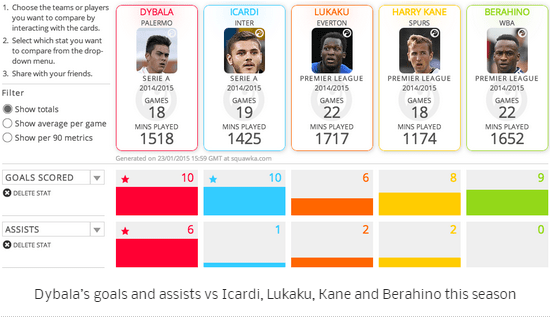 Whether Manchester United manage to land him remains to be seen, but the Red Devils are certainly interested in the Argentine forward and have been scouting him, as confirmed by Italian Journalist, Gianluca Di Marzio.

What is certain is that he won’t be cheap. Palermo president, Mauricio Zamparini recently stated that the club will do everything in their power to keep him, unless a ridiculous offer is made.

“Within two years, he’s going to be better than Cristiano Ronaldo, Lionel Messi and Zlatan Ibrahimovic. It would take 40 million euros to take him away from us”, said Zamparini.

40 million Euros is understandably a lot of money for someone so young and unproven at the highest level, but Dybala is a gamble which could prove to be a huge success, not just for Manchester United, but any club with ambition.