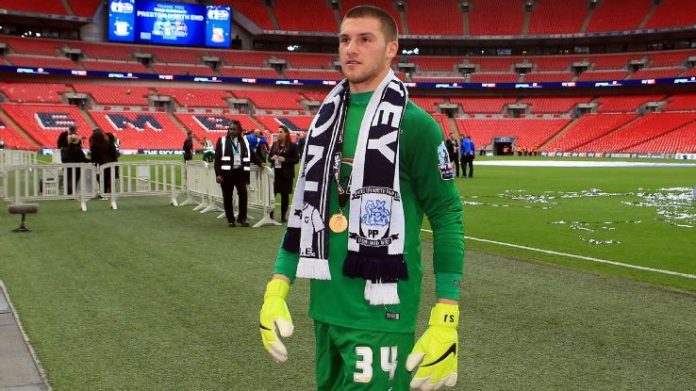 Manchester United have agreed on a deal to send goalkeeper Sam Johnstone on loan to Preston for 28 days.

According to ESPN, the 28 day loan period could be extended.

The 22-year-old was thought to be frustrated with the lack of first-team opportunities at Old Trafford and will now return to Deepdale in search of regular football.

Johnstone was a big hit at Preston during his previous loan spell and kept 12 clean sheets for the Championship outfit in 25 appearances last season.

PNE are delighted to announce that Sam Johnstone has re-joined the Club on loan from @ManUtd. Details to follow. pic.twitter.com/h8FBcTzsJq

Johnstone claimed that he is glad to return to Preston and is looking forward to playing regularly in a competitive league like the Championship.

He said: “It’s good to eventually come back, I’m glad I’m back and hopefully I can start playing games now”.

“It’s great to be around the team at Manchester United, but I am 22 years old and I have to think about myself a little bit and I need to be playing first-team football. I get to do that now in the Championship, which is a great league to play in”.

“My last game here for Preston was at Wembley, it was a great day, but now we’ve got to kick on. I’ve seen the results that the lads have been getting recently and hopefully we can carry that on.”

The young shot-stopper is behind the likes of De Gea and Romero in the pecking order and a loan move to a side where he can play regular football is a wise decision.

For a player of his age, it is imperative to play regularly and continue his development.