According to Spanish publication, AS, Manchester United have enquired about the Real Madrid attacking trio of Bale, Ronaldo, Benzema and defender Varane. 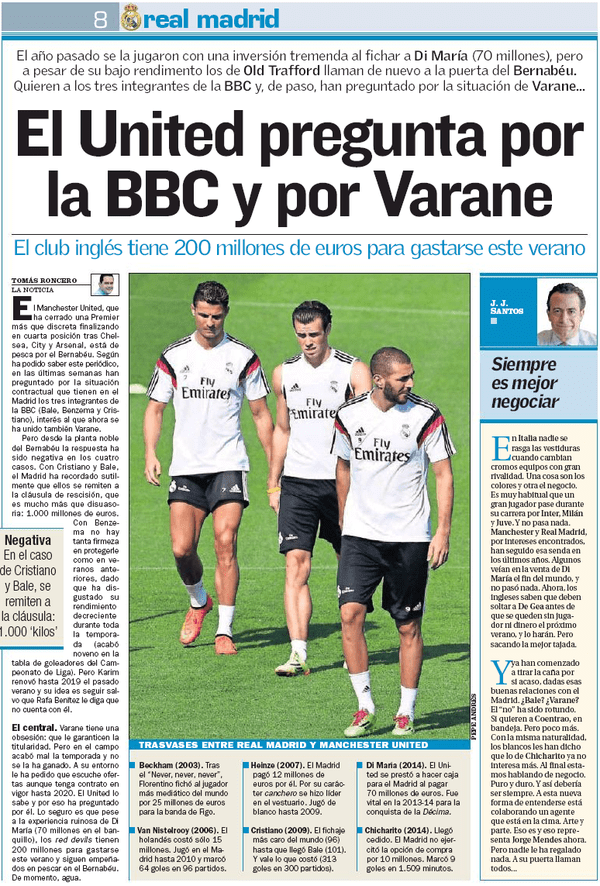 Louis Van Gaal is keen to assemble a title winning side this summer and he believes that Ronaldo/Bale, Benzema and a strong centre back like Varane will help him achieve his objective.

Earlier yesterday, Robin Van Persie confirmed that United are set to spend 200 million pounds this summer. Last season’ spending highlighted United’ desire to get back into the Champions league and Van Persie is adamant that his side will push for the title now.

The likes of Benzema, Bale, Ronaldo and Varane have been linked with moves away from Real Madrid earlier but all four players are prized assets at Santiago Bernabeu and will not be allowed to leave.

AS claim that the Old Trafford outfit have been informed that they would have to trigger the 1billion euro release clause if they wish to sign Cristiano.

Bale endured a disappointing season last year and was criticised heavily by the Spanish media and the Madrid fans. The former Spurs winger has been severely linked with a move back to the Premier League, despite him claiming that he wishes to stay and prove himself.

Meanwhile, Raphael Varane is also open to a new adventure, especially because of his issues with playing time. The Frenchman is one of the best centre backs in world football and is keen to play week in week out. If that is not possible at Real Madrid, he is willing to consider a move away from the Bernabeu.

Manchester United’s desire has been exemplary this summer, however it is highly unlikely that new manager Rafael Benitez will sanction a move for his star players as he plans to build his side around them.