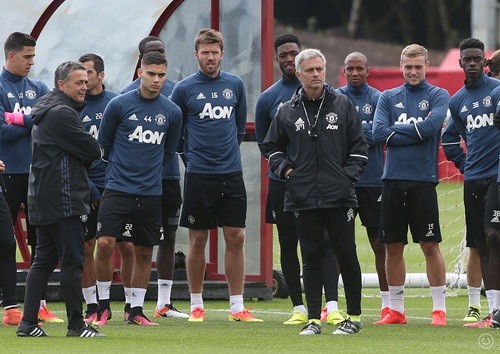 The former Chelsea manager was appointed as Louis van Gaal’s successor in May before starting off his first official day as Red Devils’ head coach in the first week of June.

However, Mourinho initiated his first training session only last week ahead of club’s pre-season tour to China and Man Utd’s veteran midfielder Michael Carrick has provided an insight of how things have started after completion of first week of training under the 53-year-old.

“It’s been very good,” Carrick told MUTV. “We came in last Wednesday and have done over a week with him now and it’s been enjoyable. The sessions are very good, it hasn’t broken us yet and hasn’t been as hard as you might think!

“There’s been a lot of football and fun at the right times, and I think everyone’s enjoying it. When you get a new manager, pre-season is always a little bit different because it’s a new personality and new ways. But you approach the season as any other and you’ve got to prepare yourself to be ready for the battle.

“That’s what the first few weeks of pre-season are for, to get that base of fitness and mentally prepare yourself for the year ahead.”

Carrick was initially poised to end his career at Man Utd this summer before Mourinho offered the England International a one-year contract to extend his stay at Old Trafford, and the 34-year-old remains hopeful of winning a final piece of silverware this season at the club where he has won five Premier League titles, one FA Cup and one Champions League trophy.
“I’m delighted to be here. I’ve been here quite some time now and I just love the place,” added Carrick.
“It’s such a great place to come and work every day. I’ve still got that drive and desire to be successful and give everything I can, so hopefully this year will be a good one.”

Man Utd face Wigan Athletic in a friendly match on Saturday before flying off to China next week for their annual pre-season tour.