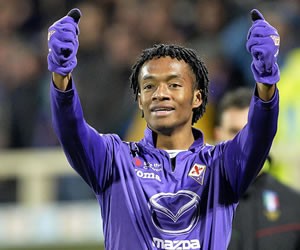 Manchester United have been handed another setback in their bid to strengthen their midfield as Juan Cuadrado has signed a contract extension at Fiorentina. Reported by Italian website Gianluca Di Marzio, the new deal will see Cuadrado remain in Florence till the year 2019. The release clause for the Colombian is now set at £27.5 million.

The 26 year-old was tracked all through the summer by United and despite the club’s failure to land him then, it was believed that Louis Van Gaal would re-ignite his interest in the player in January. Cuadrado had a stellar World Cup with Colombia earlier this year and was one of the stand-out players alongside James Rodriguez as the South Americans reached the last 8.

This news will come as a body-blow to United, after another target Paul Pogba signed an extension with Juventus only yesterday. The duo was at the top of United’s summer shopping-list, along with Arturo Vidal. Despite bringing Daley Blind to Old Trafford, Van Gaal clearly feels the need to strengthen the midfield area further. United have yet to win an away game in the Premier League this season, a clear indication of the fact that they are getting bossed in the middle of the park far too often.

United faced tough competition from Barcelona last summer to sign Cuadrado, while there were also rumours of Chelsea being interested. The Colombian will now pocket a cool 3 million euros annually including bonuses at Fiorentina. Even though United have the capacity to better that amount, it is understood that the player himself is completely focused on playing for the Gigliati at this point in time.