The end of the rather successful pre-season tour of the US brought about an end of opportunities for some Manchester United players to impress their new manager. The man himself recently admitted:

“I shall make judgements after this tour.

‘I will let all the players play and I know now more than before the tour. Now also it is a little bit soon to judge, but in football you have to judge.

“You have to give a chance to the player to make a transfer when I see that his prospects to play are not so high.

“You have to say it in advance because it’s too late after August 31.

“I will tell players after the tour but to them, not to you.”

In light of those comments, here’s a look at some United players rumoured to be facing the chop and ascertain who will start the new season at Old Trafford. The likes of Anderson and Marouane Fellaini have been omitted from the list as it seems certain that their time is up.

The end seems nigh for Zaha. Sir Alex Ferguson’s last signing as Manchester United manager was shunned by David Moyes last season before moving on loan to Cardiff City in January. It was reported at various points last season that Moyes was not impressed with Zaha’s attitude in training and recent reports have suggested Louis van Gaal isn’t particularly impressed either. That lacklustre attitude was on full viewing in a recent interview where Zaha claimed he was open to playing striker because it meant ‘less running’. He’ll have to buck up if he wants to impress van Gaal.

The striker position he craves should also, at least in the opinion of this column, remain elusive for the England U-21 International. United have plenty of quality up front in Robin van Persie, Wayne Rooney, Javier Hernandez (more on him later) and Danny Welbeck. The likes of James Wilson are also knocking on the door and with that quintet all possessing much better attributes to play up front, Zaha may well find his opportunities limited. The player seems incapable of playing the wing-back role in Louis van Gaal’s 3-5-2 system and would be much better served rebuilding his reputation in the lower echelons of the Premier League.

Ashley Young had an absolute shocker last season. The player suffered with injuries for most of the campaign and when he did feature did little to dispel United fans’ doubt that the player simply does not possess enough quality to be a United player. The player’s aimless crossing, indeed Young registered just one assist all season, and tendency to dive have made him a much maligned figure for the Old Trafford faithful.

Therefore one would be forgiven for thinking that Young has enjoyed the fresh start afforded to him by the new regime. Louis van Gaal has hinted at Young being deployed as wing-back and to the player’s credit, he’s excelled in the few pre-season games in which he’s played that role.  While the Premier League will offer much sterner opponents, Young has shown early signs of thriving under van Gaal’s management and one feels the winger will get at least one more season to convince fans at Old Trafford of his quality.

There has perhaps never been a player who’s needed a move away from Old Trafford as Javier Hernandez. The 26 year old Mexican was a revelation in his first season at Old Trafford and invited comparisons with another United favourite in Ole Gunnar Solskjaer. However, the player has faded badly in the time since then and David Moyes’ tenure perhaps aggravated that decline. The player looked completely shorn of confidence last season and even lost his starting spot for Mexico, instead featuring from the bench at the World Cup this summer.

Hernandez was a late addition to United’s tour squad and it could just be that the Mexican wanted to impress his new boss. While the Mexican did net against Real Madrid in the International Champions Cup, his boss was not particularly impressed, “ I think the striker has the biggest chance to score so that it is not the reason why a player plays. We are playing like team and the team score” was van Gaal’s response when quizzed about Hernandez. Chicharito will always remain an Old Trafford favourite but one feels the player needs a move away from the club to reignite a stuttering career. The likes of Atletico Madrid are rumoured to be interested and if a suitable offer comes in, one would expect United to sell. 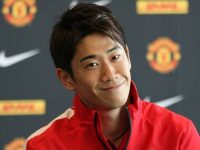 Shinji Kagawa is yet to make an impression on United fans all over the world. The player was a highly rated purchase from Borussia Dortmund but niggling injuries and having to play out of position has meant that the Japanese playmaker has struggled at Old Trafford. Kagawa failed to convince David Moyes of his worth as a No. 10 and was instead shunted out left to accommodate Wayne Rooney in that position.

The No. 10 position in Louis van Gaal’s system now belongs to record signing Juan Mata but Kagawa should prove an able deputy. United do not need a massive squad this season as they will not be featuring in Europe this season but it is impossible to account for injuries and for that reason alone, Kagawa should be expected to stay. The midfielder might even thrive when being played in his preferred position and finally offer United fans a glimpse of the talent that won two Bundesliga titles with Borussia Dortmund.

Nani has always been something of an enigma for United fans. A player who’s got plenty of skill and talent, Nani has rarely ever let that talent shine through in a United shirt. A few good games under Sir Alex were enough for United fans to believe that Nani would eventually shine through but alas things haven’t worked out for the Portuguese international. David Moyes inexplicably handed Nani a five year contract in one of his first big decisions at the club and it is a decision that means Nani is going to be the hardest to shift of all the United outcasts.

LVG does not seem to rate Nani either with the pursuit of Juan Cuadrado indicating that the Dutchman isn’t content with his options on the wings. Antonio Valencia has been handed a new contract and Young has appeared rejuvenated in pre-season which indicates that it is Nani who’s time at the club will end. Interest in the player is reported to be high with the likes of Juventus and Arsenal being mooted as potential destinations. If United’s valuation of Nani at £15m is met, no one at Old Trafford will be too perplexed by his departure.

The above mentioned players and their futures are just the opinion of this column and if you beg to differ then do let us know in the comments below. The author is also on twitter at arsal_sohail. Follow for my opinions on all things Manchester United and football this season!