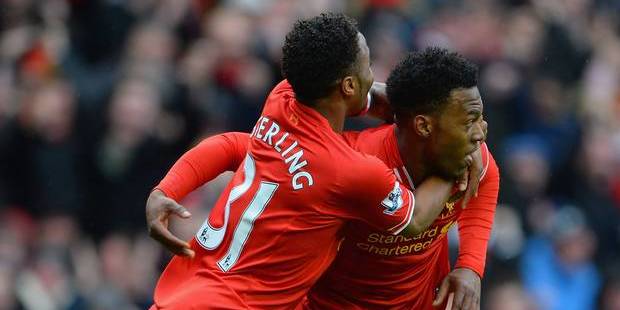 Daniel Sturridge back in training has been a welcome boost for Brendan Rodgers and every Liverpool fan across the globe.

The England international has missed most of this season due to a recurring thigh problem. Having completed an intensive rehab in the United states of America, Sturridge is now back at Melwood, getting up to speed before the all important Capital one Cup semi finals against his former club, Chelsea.

In his pre-match press conference before the Reds travel to Villa park, Rodgers confirmed that the former Chelsea forward is back in training, however, he is not quite ready for the weekend. 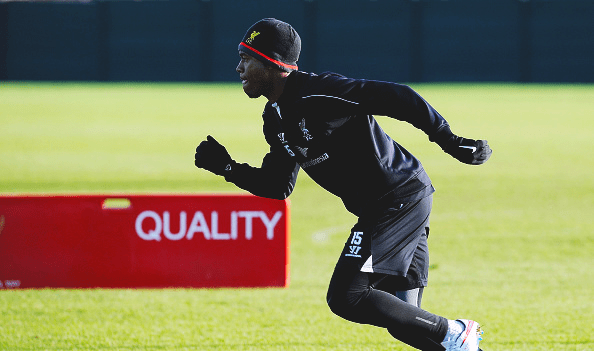 After a mesmerizing season last year, where the Reds managed to outscore their opponents with ease, Brendan Rodgers’ side has struggled in front of the goal this year. Poor performances from the likes of Balotelli, Borini and Lambert have meant that the Reds have had to do without a proper striker for half of the season.

Despite chipping in with goals as a makeshift striker, Raheem Sterling has failed to provide the much needed poacher instinct in front of the goal. Sturridge’ return not only brings back a clinical presence for Liverpool, but also allows players like Sterling to flourish in their natural roles.

With Daniel Sturridge returning to the side soon, this is how we think Liverpool could line up, to accommodate their prolific front man. 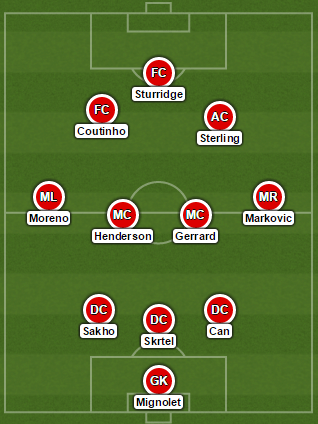 Rodgers has shown his willingness to stick with the current back three, following a series of improved performances and therefore the likes of Can and Sakho are expected to keep their place in a similar setup.

Meanwhile, Steven Gerrard could be back in the midfield alongside Jordan Henderson after having missed a few games due to injury. Returning Sturridge will be a big plus for Gerrard, who has always excelled with runners in behind the defence.

Lazar Markovic has been a breath of fresh air for the Reds over the last couple of weeks, with the Serbian finding some form, after a tough start to life at Merseyside. The former Benfica man scored the winner at the Stadium of light last week  and is expected to feature in the starting lineup more often now.

Further, depending on the opposition, we could see Lucas Leiva coming into the side with Markovic taking up the left wing role and Henderson pushed out to the right. The likes of Sterling and Coutinho have been impressive this season and should continue to be the first names on the team-sheet.

Another possibility is Liverpool going back to a diamond, especially with the likes of Joe Allen, Dejan Lovren and Daniel Sturridge back from injury. We could very well see the Reds employ a similar system that saw them dismantle Tottenham at While Hart Lane earlier this season. Also, the opportunity to pair Sturridge with Balotelli could be an enticing option for Rodgers. 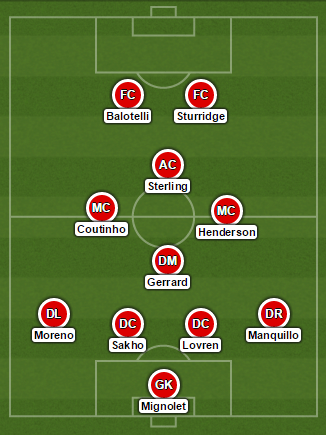 The Italian forward has looked impressive every time he has played alongside a pacey partner this season and following Brendan’s comments on him last night, it is clear that the former Manchester City striker isn’t leaving anytime soon.

A Daniel Sturridge and Mario Balotelli partnership could be on the cards. Something every Liverpool fan has been eagerly waiting for.