Liverpool will be looking to end 2014 on a high with a victory at home to Swansea City in the final Premier League match before the New Year.

The Reds could move as high as eighth by thrashing their opponents at Anfield tonight, whilst a victory of any kind would move them up to ninth at the half-way point.

Swansea are on back-to-back 1-0 victories in the Premier League with their win at Hull City before Christmas ending a game of six road matches without a win.

Brad Jones came off early on Boxing Day with a thigh injury and could miss this match as a result.

Glen Johnson and Dejan Lovren both have groin injuries that rule them out, whilst Jon Flanagan has been sidelined for a while.

Daniel Sturridge is still bothered by a thigh injury but Mario Balotelli is available, although hasn’t featured in Liverpool’s last two outings since playing 45 minutes versus Manchester United.

Jefferson Montero picked up a hamstring early in the 1-0 victory over Aston Villa on Boxing Day and the Ecuadorian forward looks likely to miss out on the action tonight as a result.

Leon Britton hasn’t seen much action this season due to a knee injury, otherwise Garry Monk has the rest of his team available to him. 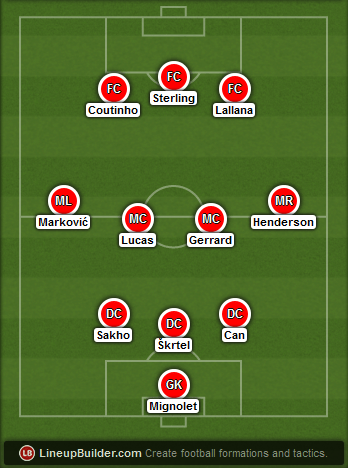 Brendan Rodgers has been using three at the back of late so we think he’ll stick with that again. Emre Can ended up playing the right centre-back on Boxing Day due to injuries so don’t be surprised to see the versatile German start there tonight. Raheem Sterling has been keeping Mario Balotelli and Rickie Lambert out of the team and the young Englishman scored the only goal at Burnley last time out so we can expect him to remain in this position. 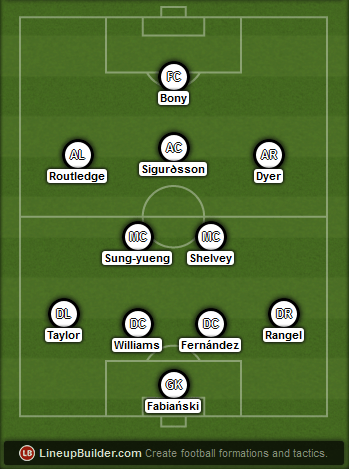 Swansea City are going to end the year in the top half. Federico Fernández is back to partner Ashley Williams in the centre of the defence. Jonjo Shelvey is set to face his former club. Gylfi Sigurðsson has the skills to unlock this Liverpool defence, whilst Wilfried Bony has been scoring goals for the best part of 12 months for the Swans.

Raheem Sterling vs Federico Fernández
Liverpool’s pacey striker should test this Swansea defence both when running with the ball and his movement off the ball. Swansea’s Argentine defender has been beat a fair few times since his arrival in the summer. Sterling had gone 12 Premier League matches without a goal before netting the winner on Boxing Day. Perhaps that’s the boost of confidence he needs. With Steven Gerrard capable of supplying the balls from midfield and with Philippe Coutinho and Adam Lallana on the wings, the youngster should see some good opportunities in this match.

Wayne Routledge vs Emre Can
Wayne Routledge chips in with the occasional goal and assist down the left wing and looks to have a favourable matchup on paper against a player who has no previous experience in this position. Jordan Henderson should provide some cover, in the same way Neil Taylor will provide some support for Wayne Routledge but we think this is one position that suits Swansea. The winger has Wilfried Bony to pick out in the centre too.

Philippe Coutinho vs Àngel Rangel
Liverpool’s Brazilian playmaker has fallen short of the player he was when he first arrived at Anfield. He shows signs of getting back to his best and we think he has a chance of putting in a top performance versus the Swansea City right-back tonight. Several players have had success in dribbling past Àngel Rangel this season and there’s nothing to stop Philippe Coutinho from doing likewise.

Prediction: Liverpool 1-1 Swansea City
Liverpool are still adjusting to their formation and Swansea City are on back-to-back victories. The Reds still need to improve their conversion rate in front of goal, whilst the visitors have one of the league’s top finishers at the moment and pace to hit the home side on the counter attack.