Two Premier League sides do battle at Wembley Stadium this weekend for a place in the 2015 FA Cup final.

Nearly 24 hours will have passed between knowing who the other finalist is that the winner of this match will be facing next month as Arsenal and Reading play on Saturday.

Liverpool got back to winning ways on Monday in beating Newcastle 2-0, whilst Aston Villa’s win at Tottenham Hotspur has put Tim Sherwood’s side in an excellent position to stay up.

Liverpool welcome back Martin Škrtel and Steven Gerrard from suspension. The captain though is not expected to start.

Mamadou Sakho is out injured so Brendan Rodgers may stick to a back four as he did on Monday, with Emre Can the likely partner of Škrtel in the middle.

Jordon Ibe is cup-tied having played for Derby County in the competition this season. Liverpool had initially agreed a season-long loan for the young defender in the second tier before recalling him in January.

Adam Lallana is out whilst Daniel Sturridge is a doubt.

Tim Sherwood has a lot of absentees for his relegation-threatened side for their first trip to Wembley since 2010.

Centre-back Ciaran Clark is injured whilst Philippe Senderos is a doubt and has not played since November. Ron Vlaar and Nathan Baker are both back. Former Liverpool left-back Aly Cissokho is a doubt, as is right-back Alan Hutton.

Carlos Sánchez is absent through suspension in the centre of midfield and Ashley Westwood is doubtful. 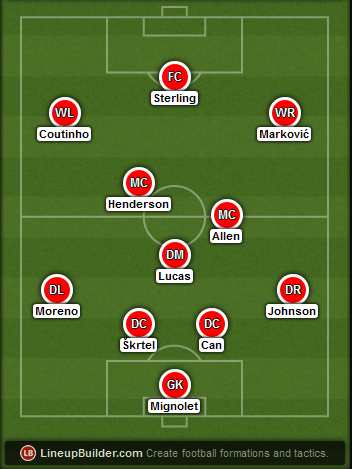 Brendan Rodgers may play it safe with four defenders at the back as playing three didn’t work against Manchester United or Arsenal of late and Mamadou Sakho is injured. We think Daniel Sturridge will miss out on the starting lineup and that the same front three that started Monday will kick the game off on Sunday. The same central midfield trio will mean Steven Gerrard will likely find himself amongst the substitutes. 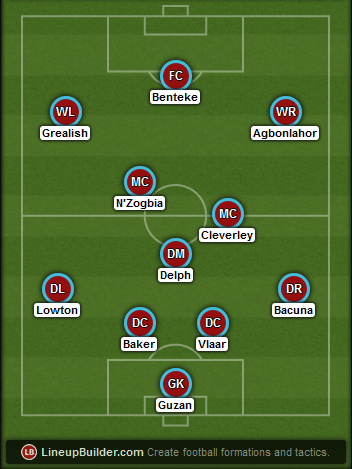 These four defenders are available to Tim Sherwood. He may not have any other choice there. Jack Grealish has started Aston Villa’s last two Premier League games after being sent off in the FA Cup quarter-final win over West Brom. Christian Benteke is the big threat going forward having found his fitness and form in recent weeks.

Philippe Coutinho vs Leandro Bacuna
Aston Villa will pack the midfield so there may not be too much space for Philippe Coutinho to pick the ball up from deep and venture forward. However, in the final third he has a good match up against an Aston Villa defence that has been decimated by injuries of late. Leandro Bacuna will have a tough time keeping the Brazilian playmaker quiet and needs to be careful not to allow him to cut inside and fire shots in on his stronger foot from around the edge of the penalty area.

Raheem Sterling vs Nathan Baker
Playing as the central striker on Monday, Raheem Sterling scored a nice goal to open the scoring versus Newcastle. He later missed two excellent opportunities. The youngster is getting himself in the goalscoring positions and we see him doing just that on Sunday. His pace should cause both Villa centre-backs some trouble.

Christian Benteke vs Martin Škrtel
Aston Villa’s biggest threat on the attack has to be star striker Christian Benteke. As Tim Sherwood has got his side scoring since a long drought under Paul Lambert, they have the potential to cause Liverpool problems. He should be supported by the pace of Gabriel Agbonlahor too. Škrtel is solid in the air which should nullify one of Benteke’s assets, but the Belgian has a good right foot on him to trouble Simon Mignolet.

1 – Liverpool have not won any of their FA Cup ties by more than one goal this season. They beat AFC Wimbledon 2-1, Bolton Wanderers 2-1 (replay), Crystal Palace 2-1 and Blackburn Rovers 2-1 (replay) to get to the semi-final.

2 – Steven Gerrard and Philippe Coutinho are Liverpool’s top scorers in this season’s FA Cup, with two goals each. Scott Sinclair has the same number for Aston Villa. Reading’s Hal Robson-Kanu (3) is the only player from the four semi-finalists to score more than twice in the 2014-15 competition.

90 – Both goals Aston Villa have conceded in the FA Cup en route to the semi-final have come in stoppage time.