Liverpool host Arsenal on Sunday at Anfield in the Gameweek 17 of the Premier League season and it promises to be an absolute crunch encounter for both sides. The Reds would be confident going into the clash coming on the back of a 3-1 win in the quarter finals of the Capital One Cup against Bournemouth.

Arsenal too, were at their splendid best as they beat Newcastle United by 4-1 last weekend. Brendan Rodgers was briefing the team news in the press conference earlier today from Melwood. Brad Jones is set to continue in goal while Dejan Lovren’s injury will be assessed after he suffered a groin injury in midweek.

Lazar Markovic will probably in line to face the Gunners, the Serbian who was in full flow against Bournemouth. Rodgers said, “He was outstanding at Bournemouth. His speed and movement was excellent.” Raheem Sterling too will also be starting after his brace in midweek.

It is expected that Liverpool could start in a more conventional 4-2-3-1 setup rather than opting to filed a 3-5-2 system given Arsenal’a pacy wingers. Lucas Leiva should start with Jordan Henderson in front of the back four, while skipper Steven Gerrard must play in a a more advances role.

Adam Lallana, Markovic and Sterling should also start as Liverpool would try to exploit Arsenal’s lack of face in the back line. This would mean that Philippe Coutinho would have to be contended with a place on the bench before being asked to make an impact coming on late in the match. 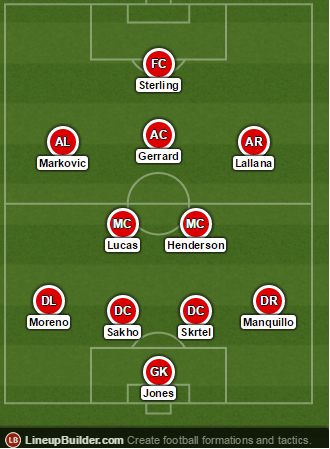