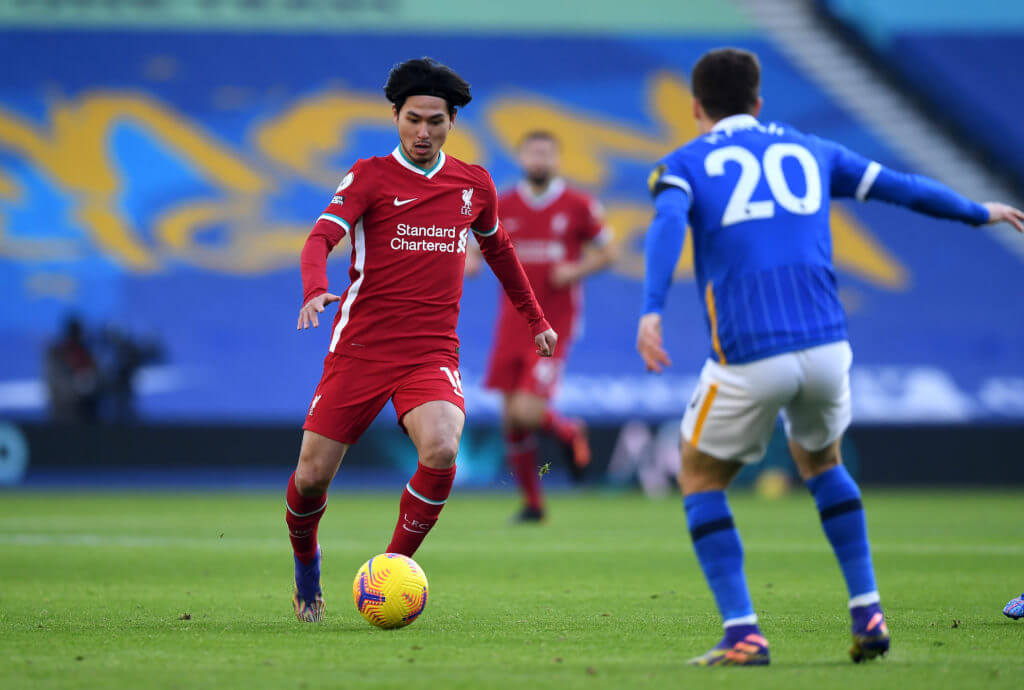 Liverpool were held to a 1-1 draw against Brighton at the Amex Stadium, but they still went top of the Premier League table.

Diogo Jota broke the deadlock in the second half with Mohamed Salah providing the assist. It was Jota’s ninth goal for the club since joining the Reds in the summer transfer window from Wolverhampton Wanderers.

Salah also had a goal disallowed for offside by the video assistant referee. Sadio Mane appeared to have sealed the game with a late header for Liverpool, but it was also ruled out by the VAR officials.

While it wasn’t a top-level performance from the Reds, one player who has particularly disappointed was Takumi Minamino.

The 25-year-old – who made his first Premier League start of the season – failed to seize the opportunity and hardly offered anything substantial.

Many Liverpool fans weren’t impressed with his performance and took to Twitter to express their reaction. Here are some of the selected tweets:

#LFC Our squad is proving too small. The fringe players who are now getting game time are not good enough.
Origi, Minamino, Neco, Shaq should all be shipped off.
Why did we let Grujic go, when having 2 good years in Germany, & looked really good during the very short pre-season?

#lfc Explain to me this. How does a 34 year old Milner, Neco Williams who has been poor when his played, and a virtually invisable player in Minamino get into our 1st 11. Its ridiculous. Henderson and Mane were fit and available to start,League is tough need to take it seriously

Does anyone think minamino has a future at Liverpool? #LFC

I feel for minamino, I'm not sure where he fits into this Liverpool team. He's lightweight on the ball, doesn't keep the ball well enough under pressure and the premier League just does not allow for the time and space he seems to need. #LFC

Salah should be pissed off to get subbed. Who wants players that aren't?

Still top, even with all the injuries and a very incompetent VAR panel against us 😉

All for giving minamino time, but we are nearly a year in, and the progression isn’t visible. Part of me wishes I could see Harry Wilson, or rhian Brewster in the squad, just so we can say they are good enough, or not. #LFC

Oh dear lord was Minamino awful or what… he absolutely a negative influence. As if we were a man down

What next for Minamino?

Since joining the club in January 2020 from Red Bull Salzburg for a transfer fee of £7.2m, Minamino has taken time to settle in at Anfield.

After impressing in several cup games this season, many had expected him to play a prominent role in the side, with Liverpool being severely ravaged by injuries.

Minamino is a versatile attacking midfielder and has loads of potential. But it seems he is still struggling to adjust to the pace of the league.

With the fixtures coming thick and fast, and Klopp needing to rotate his squad, Minamino is likely to get more game time. However, he needs to improve his level of performance, otherwise, Klopp needs to make a decision about sending him on loan in January.

There are also suggestions that Minamino needs to play regularly ahead of Divock Origi. This is really an interesting situation for him. The club has been very patient with him, and Klopp has showered praise on the player from time to time. But he needs to take his chances and play with more confidence.