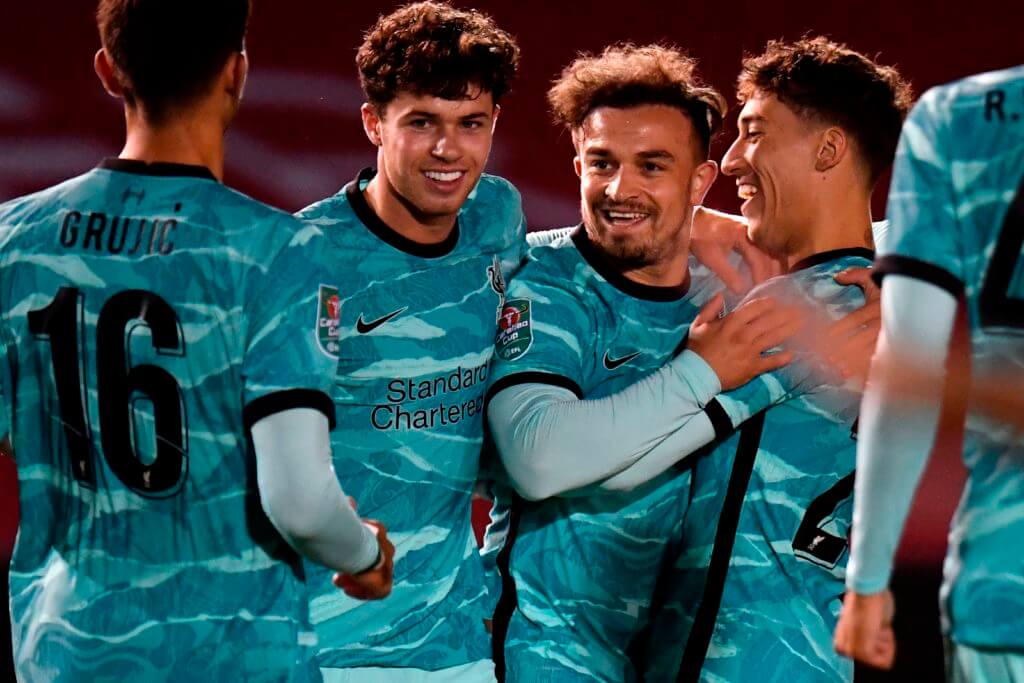 Liverpool bowed out of the Carabao Cup yesterday after losing to Arsenal on penalties at Anfield.

Jurgen Klopp’s side created some very good chances during the game but it stayed 0-0 after 90 minutes. In the penalty shoot out, Arsenal edged Liverpool 5-4 to progress to the fourth round of the competition.

Many Liverpool fans were left bemused that Klopp didn’t include Xherdan Shaqiri in the line-up, as many had expected him to feature.

The Reds boss said after the match that he was fit and there was no disciplinary issue either, which fuelled the speculation that he could leave the club.

According to Neil Jones of Goal.com, the Swiss attacking midfielder was omitted due to transfer interest from at least two clubs. As a result, Liverpool didn’t want to take any risks with him.

Many Liverpool fans took to Twitter to react to the transfer update, with many suggesting that Shaqiri should stay at the club.

I thought we should keep him. Cos we need a left footer to backup Salah so the team can be balance if we playing the backup lads. Jota – Minamino- Shaqiri is a balance and great backup . If Shaqiri is gone . Who’s the left footer to play from RW ?

Wow, absolutely criminal how we’re thinking of selling him.

Erm, this doesn't make logical sense, what about the transfer bids/interest in wilson/grujic?! They are both in starting line up @neiljonesgoal are we lfc fans missing something here?!

Been really pleased with Liverpool lately. But I think tonight shows that the depth still needs work. I don't understand how we're selling Shaq but keeping Origi, Wilson, Grujic. They don't have that game changer/winner ability like Shaq does yet he's the one leaving?

We’ll recoup the £80m we’ve laid out for our 3 new boys!! Wilson, Shaqiri, Brewster and Grujic… definitely 80 for that lot or very close to it. A standard Edwards masterclass if he pulls that off

There was always one of them was going out probably shaq got more interest and money 🤷‍♂️. Why not giving some time to Wilson it may work on our system! He haven’t played yet let wait and judge him later . But I understand what you mean 👍

Shaqiri, who joined Liverpool in 2018, has managed 42 games in all competitions, scoring eight goals.

The Swiss international is a top-class player, but he has dropped down the pecking order at the club behind Mohamed Salah, Diogo Jota and Takumi Minamino.

Liverpool are reportedly hoping to raise around £50m from the sales of some of the fringe players, and it seems Shaqiri could be heading towards the club’s exit door before the window closes.