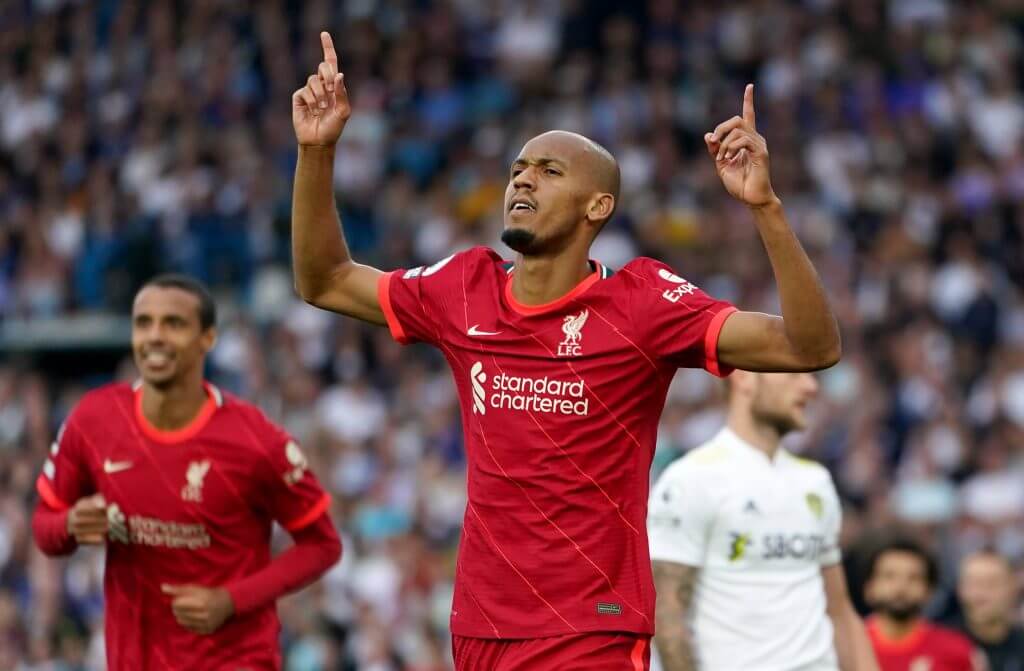 Liverpool maintained their unbeaten run in the Premier League and moved joint-top alongside Chelsea and Manchester United with a fantastic 3-0 win against Leeds United at Elland Road on Sunday.

Mohamed Salah opened the scoring for the visitors with a gentle tap in from Trent Alexander-Arnold’s cross to mark his 100th Premier League goal.

Fabinho added another in the second half just after the break, and Sadio Mane put the icing on the cake to seal all three points for Jurgen Klopp’s side.

Many Liverpool fans took to Twitter to express their reaction to Fabinho’s performance. The Brazilian was simply outstanding for the Reds yesterday and dominated the midfield. Here are some of the selected tweets:

An absolutely stunning win, we were really cooking today, played some excellent football. I can't believe another injury has hit us, just fuck off, just as Elliott is breaking into the first team, speechless. Fabinho godly. Mane terrible. Mo with his 100th league goal! #LFC https://t.co/kLdGkKz9DY

He’s the most underrated player in the team …by a lonngggggggg shot !

Best in the world at what he does. So underrated outside of our parish

Solid performance earlier against Leeds. Devastated for Harvey but I have no doubt he’ll be back just as good. Klopp got it spot on with the midfield 3. Thiago and Fabinho outstanding #LFC

Imperious performance from the very start. I was critical of Fabinho against Chelsea but today he was back to his fabulous best. Matip Thiago and Salah brilliant again. Just feels empty with Elliot incident #LFC

fabinho is just world class la. how did we manage to sign him so secretly??

The 27-year-old, who played as a central defender at times last season, has returned to his vintage best against Leeds, and he is vital to Liverpool’s title challenge.

Fabinho playing in midfield is absolutely crucial for Klopp’s defensive shield. He makes so many key blocks and interceptions and allows the other midfielders to express themselves.

The Brazilian attempted three shots and bagged a goal for himself. Defensively, he made five interceptions and two clearances.

With Elliott now out injured, Klopp will have to use other midfield options, but Fabinho’s return to form will give the team a huge lift.

However, the victory was bittersweet for Liverpool after teenage sensation Harvey Elliott suffered a horrific ankle injury following a challenge from Pascal Struijk (although it was purely unintentional).

The youngster was taken to a hospital after the game. Liverpool have confirmed that Elliott has been released from the hospital and that he will require ankle surgery.