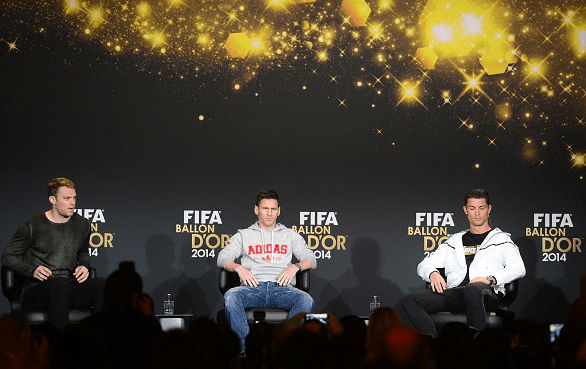 In the Ballon D’Or ceremony in Zurich, where the best footballer of 2013-14 will be announced, Real Madrid superstar Cristiano Ronaldo and Barcelona legend Lionel Messi have commented on their future, that could spark fresh speculations in coming weeks.

Ronaldo has been consistently linked with a return back to Manchester United, while recent report suggest that Messi wants to leave Barcelona for pastures new, with Chelsea and Manchester City waiting to spend ridiculous dosh to greet him him open arms.

When Ronaldo was asked to comment on his future, he said:

Ronaldo says he could RM one day. “Only God knows. I signed a new deal a year ago, but the future you never know.”

When Messi was asked to comment on his future, the Argentine replied:

More significantly Messi appears to leave door open to leaving #Barcelona. “I’m not sure where I’ll be next year,” he said. #BallondOr

Messi: “I’ve always said I’d like to end my career at Barcelona, but as Cristiano says only God knows the future.”

Messi and Ronaldo have ushered compliments for each other that clearly suggest the good relationship between them as opposed to what media usually portray. Messi has congratulated Ronaldo for having a phenomenal year while Ronaldo repaid back by saying it would have been wonderful to have played alongside Messi and Neuer, the other contestant, in the same team.